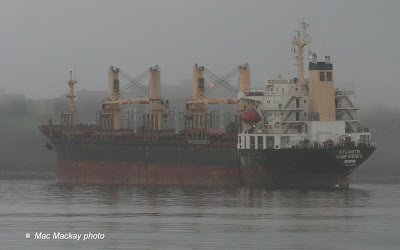 1. The ship's port of registry appears in whiter paint than its name.

Atlantik Confidence arrived last night flying the flag of Malta, but today switched to the Cook Islands, the port of registry changing from Valletta to Avatiu (a town on Raratonga.).
Built in 1996 by Hanjin Heavy Industries in Ulsan, South Korea, the ship started out life as Hanjin Antwerp for Hanjin Shipping. In 2009 it became Atlantic Confidence then in 2011 received the current spelling of its name. Its present operator is Atlantic Denizcilik Ticaret of Instanbul, Turkey.
A typical five hold/ four crane (of 25 tonnes) bulker it measures 16,252 gross tons/ 27,209 deadweight tonnes.
Many Turkish ships are registered in Malta, which has become a leading open register (flag of convenience) which has in recent years tightened up on its regulatory regime. The Cook Islands, located in the mid-Pacific between New Zealand and Hawaii, has also become an open register in recent years, promoting its ease of registration on-line 24-7-365. There are also no taxes paid by ships registered there, but that is typical of most open registers (that is they are open to non-resident owners). What the particular attraction of the Cook Islands may be to this particular ship owner is open to speculation. The Cook Islands is listed as a Grey List state by the Paris MOU*.
The ship's last port was Puerto Cabello, and after bunkering the ship was due to sail this afternoon. However Connors Diving's boat Northcom arrived alongside and diving started about 1 pm. The ship is now due to sail at 1 pm tomorrow.

2. Algoma Dartmouth is parked alongside bunkering.

*  The Paris MOU on port State Control, representing 27 nations, aims to eliminate sub-standard ships through a harmonized system of port State control. All the signatory states inspect for and enforce safety, security, environmental and working condition standards on ships calling in their ports. The MOU covers the North Atlantic Basin ands European coastal states. It ranks the various flags of registration by degree of risk based on the inspection performance of ships from those states.  The Black List of 18 states are also graded in severity of risk. Very few black list flags show up in Canadian ports as a result, since they are targeted immediately for inspection, usuallly have deficiencies and are often detained.
The Grey List states, which are considered average, include Egypt at the bottom, followed by Cook Islands, and consist of mostly open registers or developing nations, but does have USA at the top.
The White List contains most of the well known registries and Malta is in the middle. All told there are 84 flags on the lists.
For more on the Paris MOU, see their web site at: http://www.parismou.org/
Canada does not appear on any of the lists, even though it is a signatory to the MOU, simply because Canada does not have a statistically significant number of ships trading internationally and thus cannot be ranked.
Posted by Mac at 7:45 PM