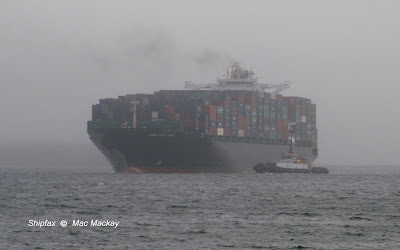 The tug Atlantic Larch makes fast at the bow as UASC Umm Qasr looms out of the fog.


This is the first call for the ship on the Columbus Loop service that started in August 2015, but got into full swing in October. Those calls (15 ships) in the fourth quarter of 2015 boosted the Port of Halifax's yearly statistics into positive growth territory compared to last year's fairly dismal numbers.
See http://portofhalifax.ca/cargo/statistics/

The big ship begins its turn to back in to Halterm. The tug Atlantic Oak is on the starboard quarter assisting in the move.

There is much speculation on the future of these joint services as mergers come into play. One of the Columbus Loop partners, CSCL, has been forced to merge with China Ocean Shipping Co (Cosco) by the Chinese government. The two lines participate in competing alliances and it is any body's guess how that will shake out. 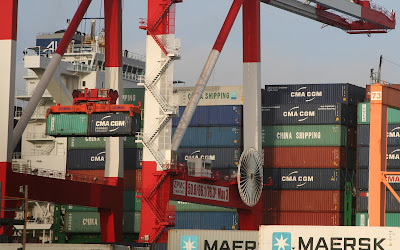 With Maersk breathing down everyone's neck, other lines are competing for business, with an oversupply of ships and diminished deamand.