That unique combination of frozen spray and fog prevailed today as temperatures rose to zero and above. The melting snow from two days ago and light rain saturated the air which was still cooler than the sea surface temperature, resulting in a moderately thick fog.
However colder temperatures just a day ago had given inbound ships a thick coating of frozen spray. Not much effort was made to remove the stuff, since it was sloughing off in the warmer air anyway.

Atlantic Concert picked up a heavy of frozen spray south of Newfoundland on its way across the Atlantic. 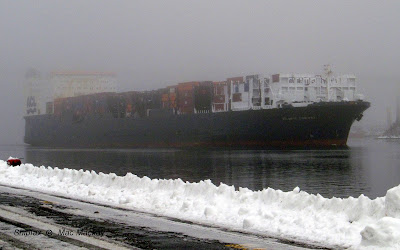 It sailed from Fairview Cove this morning and its booming fog signal echoed off the walls along the Narrows and could still be heard even after the ship had passed Meagher's Beach on the way out to sea. Thick ice still coated the fore section of the ship, but was sliding off periodically.

A regular caller since June 1984 the ship and its remaining three sisters are on the way out, with the news that the first G4 ship Atlantic Star sailed from Liverpool December 28. It is due in Halifax January 4 or 5, replacing Atlantic Companion, which has already gone to the scrappers.

At Haltern, another ship that had followed a similar course across the Atlantic, picked up its frozen spray on the way from Argentia to Halifax. 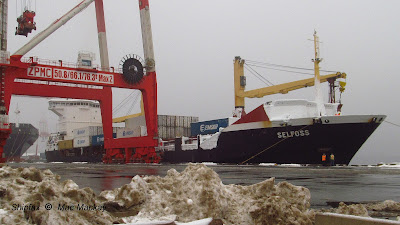 Selfoss  had a thick coating on its breakwater, making for awkward work on the foredeck for the crew. The ship is now bound for Portland, ME and warmer temperatures. 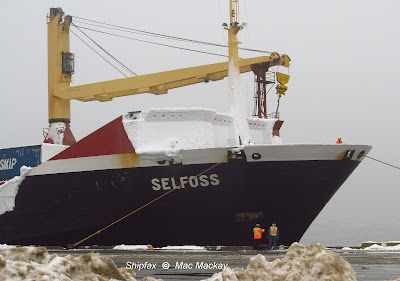 Selfoss has been a regular since February of this year when it was added to the Eimskip service with Reykjafoss and  Skogafoss. It was built in 1991  by Orskov Christensens in Frederickshavn, Denmark, first as Hanne Sif. It was soon renamed Maersk Tertio, then Hanne Sif, Elizabeth Delams, Vento di Ponenete and Hanne Sif again before becoming Selfoss in 1999.
It carries 724 TEU and two 40 tonne cranes and measures 7676 grt. 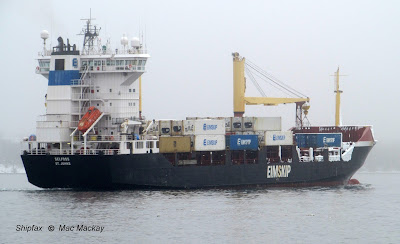