Arrivals from the south - BBC Xingang and Posillipo

Nirint Shipping is experiencing an upswing in Cuban trade and has brought in the BBC Xingang for a quick round trip between Rotterdam and Cuba. Forsaking some of the usual wayports it went directly to Mariel and Moa and is returning from Halifax straight to Rotterdam.

BBC Xingang is a heavylift ship, built in 2013 by Tianjin Xingang in Tianjin, China. The 8233 grt, 9279 dwt ship has two 350 tonne cranes, and may have delivered some large cargo to Cuba. However it is a versatile vessel and is returning with containers and the usual breakbulk cargo of bagged nickel sulfides for pier 31. It has a nominal TEU capacity of 660, but 377 if loaded, with 60 reefer plugs.
It is on charter from Briese Schiffahrts, operators of BBC Chartering of Germany and flies the Antigua and Barbuda flag.

It is a sister ship of BBC Mont Blanc that was here April 18 with a very different cargo of steel fabrications, many of which are still on the adjacent pier 30 as they are gradually trucked away.

Arriving from Beaumont, TX,  Posillipo anchored in the lower harbour. Despite its name (a neighbourhood of Naples) and Italian flag, it is one of those SuperIce class tankers. Equipped with full width bridge and large accommodation block, it is a nice break from the usual Korean handysizes.

It was built in 2010 by Guangzhou International, Guangzhou, China and has typical handysize measurements of 29,283 grt, 53,116 dwt. Owners, LGR di Navigazione SpA of Naples, also operate the sister tanker Cenito which has called in Halifax half a dozen times. 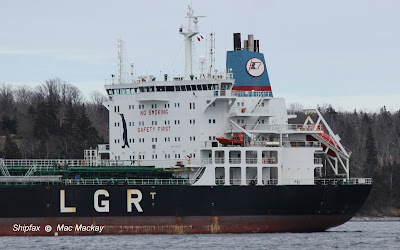 The large penguin motif also hints at the ship's ice class. It once operated in the Torm pool, then in the Hafnia pool, but is apparently now on charter to an oil major.