Although not completely set in stone yet, the replacement for the G6 Alliance of container lines appears to be set to start up in about a year's time. 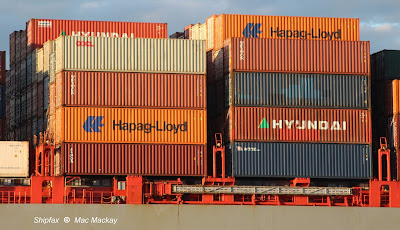 Of the eight "orphan" lines left over from the realignment of major lines, all but two are not confirmed as members of a new grouping entitled THE Alliance. Hapag-Lloyd, Hanjin, NYK, K-Line, MOL and YangMing are the confirmed members. The arrangement is inked for five years, but much can change by then. 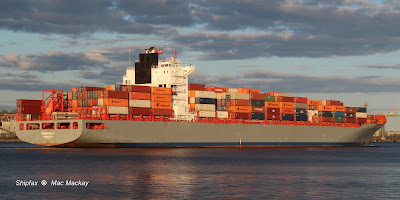 The United Arab Shipping Co (UASC) is in separate talks with Hapag-Lloyd. The result could see H-L acquiring UASC (unlikely), a merger of some sort or a form of sub-alliance, but UASC will be a member of THE Alliance when that is settled.

Also left out for the time being is Hyundai Merchant Marine which is teetering on the brink. Lenders are pressuring HMM to reduce its costs by renegotiating lower rates for its chartered-in ships. There may be more news on how that turns out as early as this week. If HMM survives it will also join THE Alliance.

THE Alliance is reported to control 650 ships, and if UASC is included, 4 mn TEU.

What this means for Halifax is speculation on my part, but it seems likely that we will see THE Alliance ships generally doing the same work that the G6 ships are doing now.

NYK Rumina sails this morning as The Port Authority workboat Maintainer I goes about its business.