The Dutch multi-purpose, ice class, general cargo ship Ijsselborg sailed this evening after discharging a cargo rails for CN. It arrived in Halifax April 25 and  unloaded at pier 27. 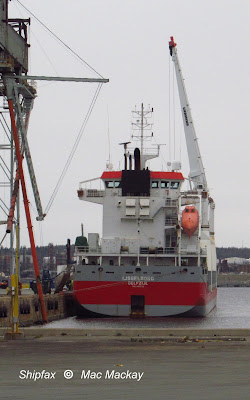 Built in 2010 by the Dutch-owned Damen Yichang Shipyard in Yichang, China the 8999 grt, 12,016 dwt ship carries a pair of cranes that were used to unload the rails. It was built as Ijsselborg for Reederij Smit BV but was renamed 2011: Onego Houston, 2011: Ijsselborg, 2012: Clipper Alba, 2015: Nordana Sarah, 2015: Ijsselborg. It wears the colours of Royal Wagenborg who manage a number of ships for smaller Dutch owners and often sub-charter them to other companies.

At pier 31 just opposite, Wilhelmsen's Pure Truck and Car Carrier Toreador arrived late this afternoon. It will be unloading machinery, and will be moving to Autoport before it sails tomorrow. 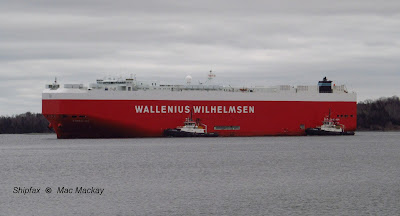 It is a 61,328 grt, 22,098 dwt ship with a capacity of 6350 CEU. Built in 2008 by Mitsubishi, Nagasaki it is one of a class of ten ships distinguished by a full width navigation bridge. Not visible in the photo is an array of solar panels atop the accommodation providing 10kW for interior lighting.