So that big ships may use Halifax Harbour a number of small boats are needed to do their bit.
One function of small boats is soundings, and it seems that this week there are a number of survey launches  present in the harbour. That activity is related to the 2016 Canadian Hydrographic Conference taking place here this week. 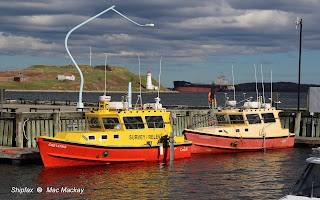 One boat that can be seen here regularly is Pipit a government survey launch. Freshly painted, it looks quite splendid alongside its faded sister Pelican. Both were tied up at Bishop's Landing this afternoon after some demonstration work in the harbour. They are operated by Fisheries and Oceans Canada and were built by Harbour Marine Services.

One that I have never seen here before, is owned by Public Works and Government Services Canada, but is registered in Edmonton. 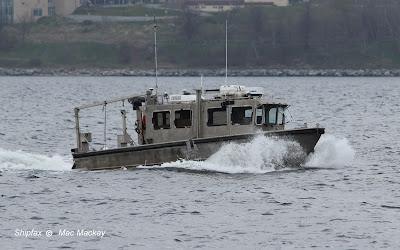 Named Rampart Surveyor it was built by Kanter Yachts in St.Thomas, ON in 1990.


Big ships like Stella Laura need reliable charts - even if they are in ballast.

Another small boat was working  at Halterm today. The unnamed craft, built by Connor Industries of Parry Sound, ON is an outboard powered survey launch used by McNally Marine. 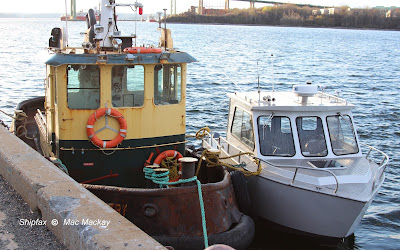 McNally's dredge Derrick No.4 and tug Whitby were carrying out some leveling work along the pier face. Propellers and bow thrusters have scoured the bottom and it needs to be leveled off periodically to maintain 45 feet depth of water.