The container ship Atlantic Compass is on its way to the breakers in India. One of the five stalwart ACL G3 class, it made its last stop in Halifax overnight April 18-19. On completion of its rounds in Europe, it sailed from Antwerp May 11 and is giving and ETA of June 16 for Alang. 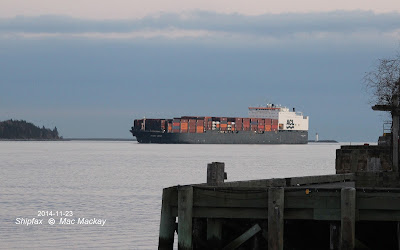 Atlantic Compass - the ship in the header of this blog since 2014 -  arrives in Halifax at dusk. That photo (and this one take a few minutes later) was selected because it was more or less timeless - the ACL G3s have been a fixture here for so long.

Launched June 20, 1984 by Kockums AB in Malmo, Sweden, it made its initial call in Halifax I believe on December 14, 1984. It was the first of the five G3s to be lengthened, sailing form Liverpool February 1, 1987, and after discharging in Portsmouth VA February 13 sailed directly for Korea. Taking 26 days it arrived at Hyundai, Mipo in Ulsan for the five week process of inserting a new midsection,  uprating its main engine and other associated work. It was back in service in May, arriving Halifax May 30.

Replacing the Atlantic Compass will be the new G4 Atlantic Sail due in Halifax for the first time May 20.

The last photo I was able to get of the ship was on the eastbound leg of its last round, on April 10.
http://shipfax.blogspot.ca/2016/04/another-busy-weekend.html

I have taken scores of pictures of the ship over the years, but one memorable photo has the ship sailing under the Bayonne Bridge into Newark Bay. In an oddly similar situation to Halifax, the ship must negotiate a narrow passage, called the Kill van Kull, then transit under a restricted bridge to reach its terminal. That bridge is to be raised in a multi-million dollar plan to improve access to most of the Port of New York / New Jersey's container terminals. That port has had the added complication of a massive dredging program to increase channel depth for larger ships. 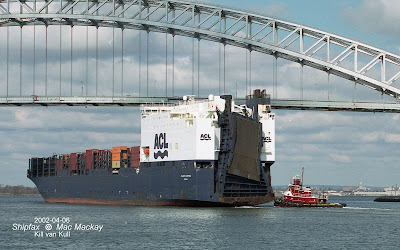 The vintage tug Brian A. McAllister provides tethered escort, in a photo that also could have been taken anytime over a period of many years.

The three remaining G3s will soldier on until the new G4s replace them during the course of this year. They have established an almost unique place in transatlantic history, by serving essentially the same route for 32 years.