The Mexican naval training vessel Cauahtemoc put in today after two days at anchor outside the port. The arrival at the Cable Wharf, coincided with the regular arrival of the cruise ship Veendam, giving visitors an added attraction on the Halifax waterfront. 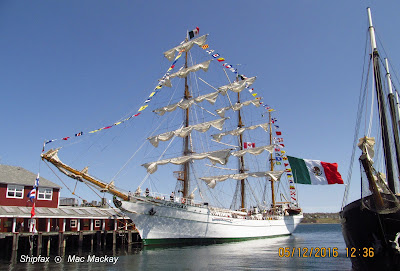 At the adjacent Queen's Wharf, the harbor tour vessel Silva *- also billed as a tall ship - looked rather puny by comparison. Lacking topmasts and some of the other appurtenances of a real tall ship, it nevertheless does sailing tours of Halifax harbor and is much enjoyed by tourists and locals alike. 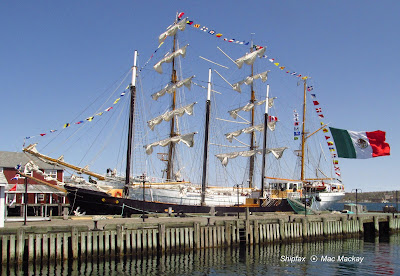 *  The official name of the vintage three masted schooner is Silva of Halifax, following a naming tradition of Sweden, where it was built, by using the homeport as part of the name to distinguish it from other ships using the same name.