A unique ship arrived this morning in anchorage number 1. Audacia is a pipelaying ship, one of only a few such vessels in the world. Fitted with a long gantry over the bow, it lays subsea pipe in a continuously welded run. Given a large enough radius, even large diameter pipe will bend and not damage the welded joints. That  is the principal of the gently curving bow gantry, which is lowered into the water for pipelaying. The 100m long gantry is called a stinger for more or less obvious reasons.. 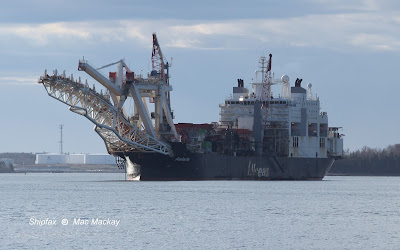 The ship is operating for Allseas Canada, to lay three 24" diameter pipes in the sea floor, 88m to 102m down, for the Hebron oil field off Newfoundland. Each pipe will be two km long, and will transport oil from the Hebron gravity base production unit to a floating tanker loading facility.

Work on the pipelay was to start April 15 and to be completed June 15, so its visit here halfway through the work is a bit of a mystery. However the first portion of the work was a seabed survey, so perhaps that is complete.

Audacia started life in 2004 as the conventional bulk carrier Ingrid Oldendorff, delivered by the Jiangnan Shipyard in Shanghai. It measured 40,230 grt and 73,808 dwt. Within a year it was purchased for conversion, which was completed in 2007, resulting in new measurements of 56,172 grt, 31,464 dwt. Conversion also included a much larger superstructure to accommodate the pipelay crew and all the required pipe storage and working areas. There are cranes, a helicopter platform and numerous other features that allow it to work anywhere in the world.

Detailed specs may be found here: http://allseas.com/equipment/audacia/
and there are numerous videos and other references on line, including the coasting trade application made to the Canadian Transportation Agency, which describes the Hebron work in more detail: https://forms.otc-cta.gc.ca/maritime-marine/attach_eng.cfm?id=228896&seq=1

Addendum:
As the sun moved around later in the day, more detail became visible, including a float alongside below the gangway, where some equipment was moved aboard the ship. 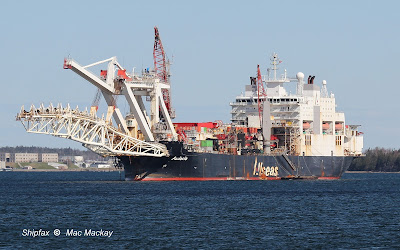