There were three arrivals today, but looking at the pictures it is hard to believe that they were taken in the same day.

Late this morning Bomar Resolute loomed out of the fog once it was well in to the harbour.

As it made its into the Narrows the Angus L. Macdonald bridge was barely visible in the background. The tug Atlantic Oak is accompanying the ship untethered.

Bomar Resolute is taking up some surplus cargo for Atlantic Container Line, and is lightly loaded on its westbound crossing from Liverpool. (HAPAG-Lloyd also uses ACL ships as a transatlantic service). 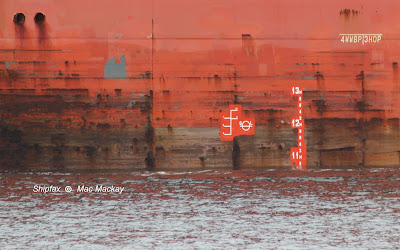 The ship is loaded well below its deepest draft. As with most German ships it is classified by Germanischer Lloyd, hence the "GL" on its plimsoll mark.

The ship was built as recently as 2007 as Gabriel Schulte, but was renamed Maruba Cristina almost immediately, and carried the name until 2011. It then became Cape Moreton on a charter to Hamburg-Sud until 2014. It then reverted to Gabriel Schulte until last year when it came under the control of Borealis Maritime of London, but still managed by Bernhard Schulte.
A product of the Shanghia Chengxi shipyard, the 35,991 grt, 42,074 dwt ship has a capacity of 3534 TEU including 500 reefers. It is of an unenviable size these days as larger ships push their way into most trades, compacting rates down to unprofitable levels for ships like this one. 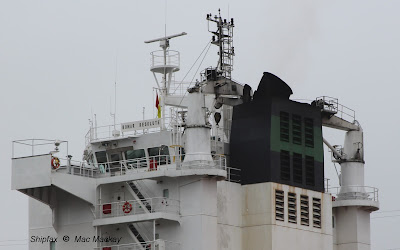 Owners are economizing by reducing maintenance to only the essentials - such as painting the draft marks. The ship is still wearing its Hamburg-Sud hull colour, and even repainting the funnel only covered the flanks, leaving the green stripe of the Schulte fleet on the after side.  (The Bernhard Schulte funnel is black with  white S on a red disk centred on a green stripe.)

Within an hour or so the fog had begun to burn off, although there was still some doubt about the continued existence of Dartmouth on the east side of the bridge. 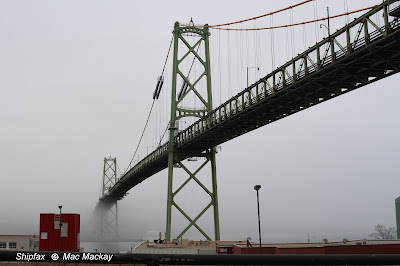 By early afternoon there was little trace of the fog except on the far horizon as Spikeroog arrived and made its way to Pier 9C. 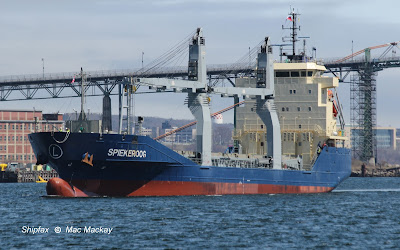 The Antiguan flag ship is owned by Conship Management of Emden, Germany and is arriving from Hvammstangi, Iceland. The 4511 grt, 5488 dwt ship was built in 2013 by Qidong Daoda Marine of Qidong, China and is of the multi-purpose type. Its large hatch covers can carry containers and the box shaped holds can carry a variety of cargo. Prominent ventilators forward indicate the ability to control humidity for such cargoes as grain a, steel and paper. It also carries a pair of 45 tonne cranes for cargo, offset to carry deck loads. 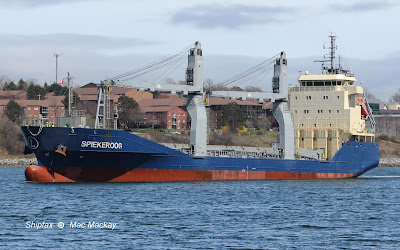 The ship glided into pier 9C, without tug assistance, using its bow thruster, despite a chilly breeze from the north. Waiting on the pier are some metal fabrications that appear to be elements of an undersea cable tank. 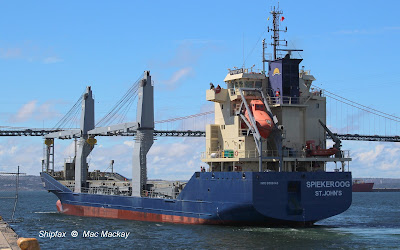 By later afternoon the temperature had rocketed up the mid-teens (C) and it looked more like summer as OOCL Antwerp arrived, greeted by jet-skiers.

The tug Atlantic Fir has made up as stern escort tug and the ship makes its way east of George's Island heading for the Narrows and Fairview Cove.

OOCL Antwerp is a post-(old) Panamax ship of 66,462 grt, 66,940 dwt, with a capacity of 5888 TEU (including 586 reefers). Built in 2006 by Koyo Dockyard Co of Mihara, Japan, it is owned by Shoei Kisen Kaisha of Tokyo, and flies the Panamanian flag, but managed by the aforementioned Bernhard Schulte's Chinese branch in Shanghai.