The autocarrier Tranquil Ace put in at Autoport this morning and sailed late this afternoon for Newark.
Built in 2009 by Minami-Nippon in Usuki Japan, it is part of the 120+ autocarrier fleet of Mitsui OSK Lines (MOL).
With a gross tonnage of 58,939 and a dwt of 18,840, the ship can carry 5219 autos, served by a side ramp and a 100 tonne capacity stern ramp. 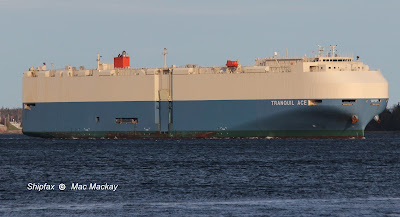 MOL brands its autocarrier fleet with the "ACE" suffix, signifying Auto Carrier Express. The prefix names are themed depending on the type and class of ship. Gems and flowers are among the various themes.
See the fleet list here: http://www.molroro.com/Vessels.aspx

However this one seemed to me to have an odd name until I sensed a pun. Several ships of the same vintage were built with astronomical names, such as Comet Ace, Galaxy Ace, Planet Ace, etc., Since the ship was built in 2009, the 40th anniversary of the first human landing on the moon, perhaps it was a pun on the landing site. Located in the area known as Mare Tranquillitatis, the spot was named by the Apollo 11 NASA mission as Tranquility Base.
Or maybe I'm just trying too hard.