The former J.P.Porter Company base was also the stopping off point for ships that were on their way to the scrappers. One such was HMCS St.Laurent, the lead ship of a revolutionary class of designed and built in Canada warships, that were the envy of the world when they were built.

Launched in 1951 and commissioned in 1955, St.Laurent lead a distinguished naval career, including conversion from destroyer escort to a helicopter carrying destroyer, and was finally paid off in 1974. After giving up spare parts to sister ships for a few years, it was sold for scrap in September 1979 and moved to the Porter wharf where it was gutted for salvageable materials. 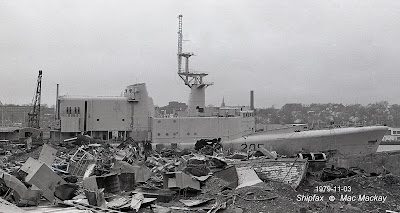 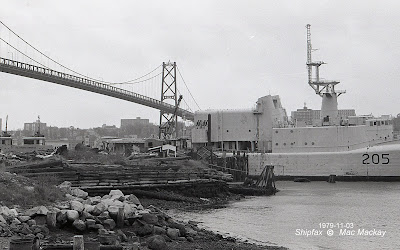 During its brief stay at Porter's St.Laurent left no permanent record, but the state of the yard, and some of the occupants in late 1979 show up in these photos. There is still evidence of sunken barges around the perimeter, but these were gradually being filled over.

St-Laurent was then sold to ship breakers in Brownsville, TX. After leaving the Porter pier January 8, 1980  in tow of the tug Odin II, it sank in a storm off Cape Hatteras on January 12, 1980. It is likely that the ship had been made unstable by the removal of all the salvageable material, hastening its sinking.


In 1984 during another visit, the place was still a busy scrap yard, with the stern trawler J.E.Kenney hauled out on the shore. 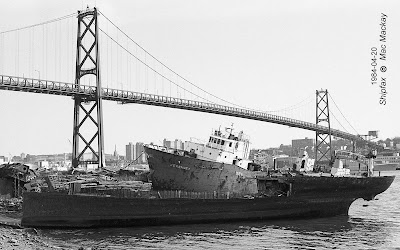 The hulk of the Koralle in the foreground with a listing J.E.Kenney behind.

Built in 1966 by Halifax Shipyards, for Riverport Seafoods Ltd (part of the H.B.Nickerson group of companies), it was among the earliest stern trawlers built in Canada. It capsized inexplicably at its berth in Riverport in May 1975 and languished around the waterfront for many years until it was hulked at Porters. Again there is probably little left of it on site, because the hulk, after being cut down to the tank tops, was patched up for use as a scow. 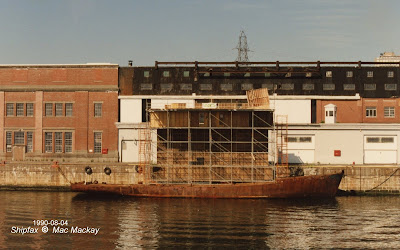 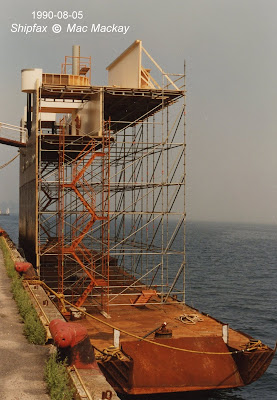 In 1990 a portion of the stern ramp is till visible, a clue to its identity as a trawler. 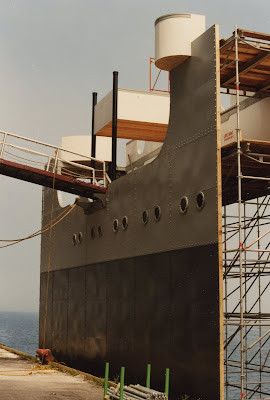 A rather unconvincing Titanic formed a backdrop for filming.

Among the chores J.E.Kenney performed in its second life was as the base for a movie set at pier 21, where a portion of a ship's side (purporting to be the Titanic) was represented.
It was driven aground in Dartmouth Cove during Hurricane Juan in 2003 and was eventually scrapped there in 2006.


The old J.P.Porter yard has grown over with grass and shrubs. But all the while the shoreline has been gradually eroding away. As the piles around Daisy rotted and fell away, and her deck and hull plates rusted out, the fill washed out exposing more and more of her remains. 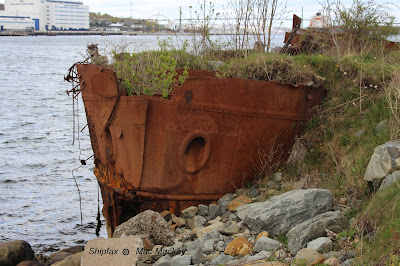 At low water, Daisy's upper bow is visible, but the bottom plates are rusted through. 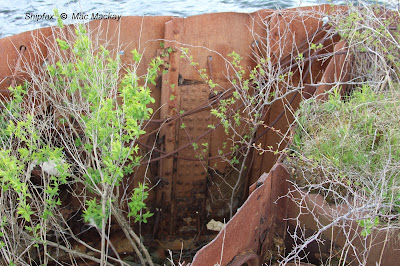 With the deck now gone, the forepeak is open, and a riveted patch is visible, evidence of a long forgotten accident. 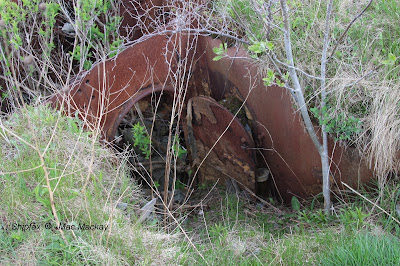 A watertight door remains open to the forepeak and chain locker. The deck has collapsed amidships and most of the side plates are gone. 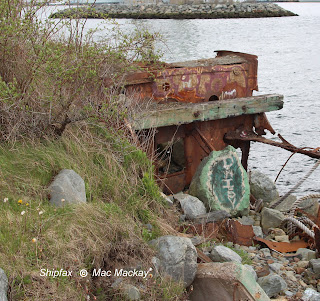 A bulkhead remains about amidships, and has been used as a hang out, but most of the spray painted graffiti has also worn away. 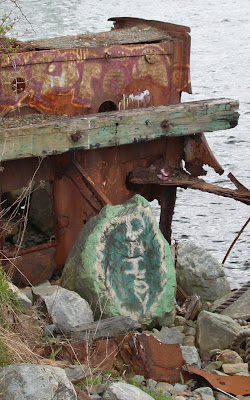 The ship's identity was apparently well known, and some historian made sure by painting her name on a rock. 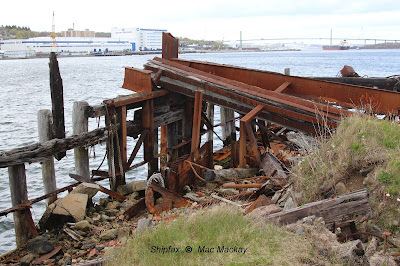 The stern is covered with some scrap steel from another structure. 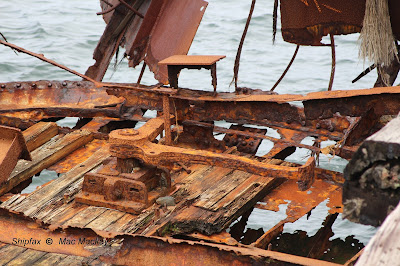 Amazingly the cast iron steering quadrant and some wood decking remain around the rudder flat. I am told that most of the rudder remains intact underwater.

From my research I believe that Daisy was retired from service in late 1946. 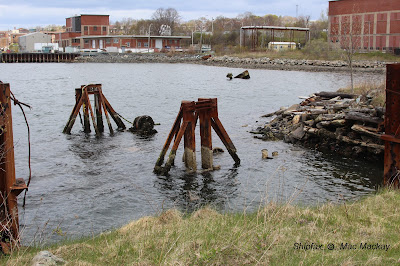 The remains of an old Porter spud scow are clearly visible, including winches and mooring bits, with more just below the surface. In the middle ground the rudder post of the Koralle still stands; and in the background some more steel has washed ashore near the NAD Jetty Lima.

The area south of the Macdonald bridge is also filled in over old scows and other craft. 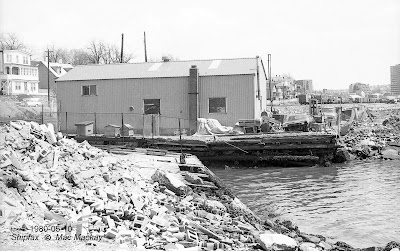 This 1980 photo shows the well known Fader Agencies building teetering on the edge of a filled and piled wharf. Wonder what is under it? 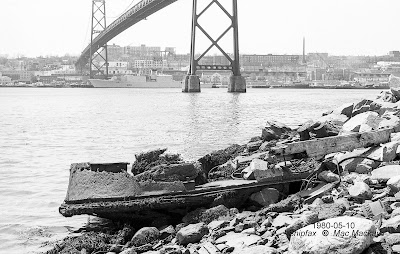 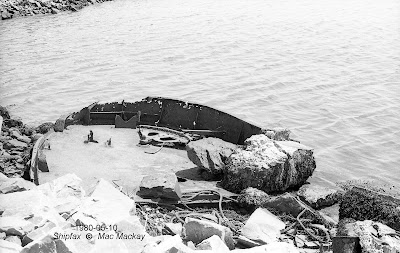 Also in 1980 the stern of an old tug peaks out from the a pile of fill. The rudder quadrant is aching for a souvenir hunter to pick it up. 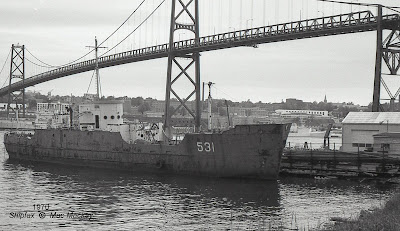 A former US military landing craft was broken up at the south side of the Fader Agencies wharf in the 1970s. 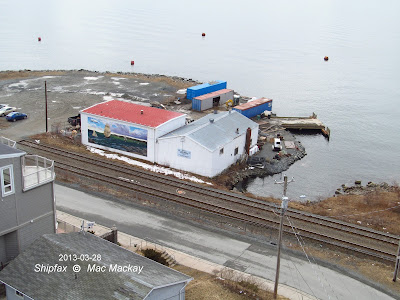 Fader Agencies as it appeared in 2013, taken from the bridge, is located on a small peninsula of fill, and is now a staging area for the bridge re-decking project. The stern of the old tug is still visible in the bottom right corner of the photo.


The old CNR Windmill pier was also the resting place for numerous other derelicts and retired ships. 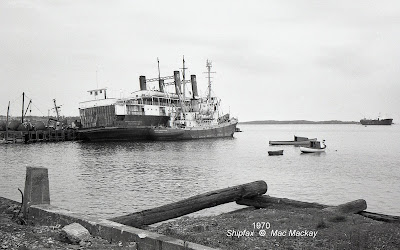 The rail car ferry Prince Edward Island, built in 1915, languished at the CNR pier for a time until it was converted by a consortium that included The J.P.Porter Company for use as a dredging pump platform on the St.Lawrence River. It survived for many years after that until broken up in Toronto in the late 1990s.

The sealer/researcher Arctic Endeavour is tied alongside. Owned by Shaw Steamships of Halifax, it was a veteran of the US  Navy, the Royal Navy (where it was used by the British Antarctic Expedition), the Royal New Zealand Navy as an Antarctic supply ship, and many years of seal hunting in eastern Canada. It lasted until 1984 when it sank in Newfoundland..

On the far side of the pier the masts of several sunken and abandoned vessels protrude above the water. 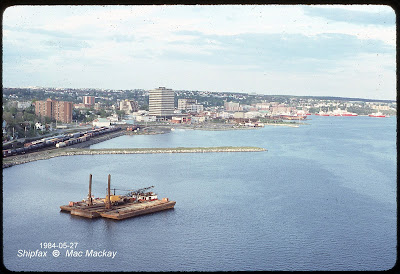 By 1984 the pier had been covered with fill and at least the visible portions of the wrecks had been removed. Fader's is just out of the picture at left.

When you move along the Dartmouth waterfront to Dartmouth Cove you might be surprised again at what  lies under your feet. But that is for another time.........
Posted by Mac at 6:53 PM