The newly formed service called THE Alliance, replacing the old G6 Alliance, brought in a first timer to Halifax today on its Transatlantic Loop 6 (AL6) service from the Mediterranean.


Brevik Bridge is a 4526 TEU ship of 46,444 gt, 58,200 dwt built in 2011 by Samsung SB+HI. Flying the Hong Kong flag it is owned and managed by Hong Kong-based Seaspan Corp, one of the largest ship leasing companies, and part of the Washington Group which also includes Seaspan shipyard and Seaspan towing in Vancouver.

The ship is on a 12 year charter, with two three year options to K-Line, a member of THE Alliance, along with Hapag-Lloyd, MOL and NYK. Yang Ming is also  member, and UASC by virtue of its owners Hapag-Lloyd is also represented in THE Alliance.


The three Japanese lines will be pooling their container fleets, and possibly re-branding.
UASC will also likely lose its identity when  fully merged into Hapag-Lloyd.
Yang Ming (of Taiwan) is on a sort of probation until it resolves some of its financial issues, which it may do sometime in 2017, at which time it would become a fully fledged member.
THE Alliance represents about 18% of the world's container capacity and is thus the smallest and potentially weakest of the latest round of shipping agreements. 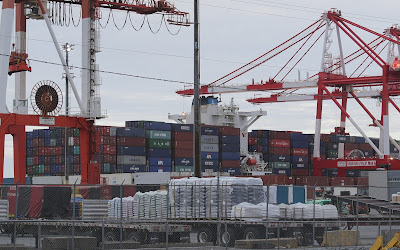 The best I could do was a photo from the parking lot, where Cosco Japan dominates pier 41.

Interestingly, yesterday CMA CGM's Columbus Loop service call in Halifax was made by COSCO Japan, which is also a Seaspan owned ship on long charter to COSCO. The 91,051 gt, 101,500 dwt ship has a 8500 TEU capacity and is on a 12 year charter (plus three one year options) from its 2010 year of build by Hyundai. 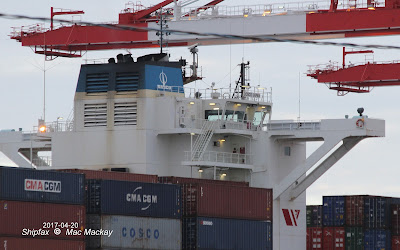 With COSCO funnel marking and the Washington Group logo below the bridge.