Friday was a holiday for most, altoughh wa some limited activity in the port.

At pier 31 the Antigua and Barbuda registered Nica was idle, part way through discharging a cargo of nickel from Cuba. In the photo taken Thursday the ship was busy unloading and taking on fuel, although some ballasting /trimming was going to be necessary! 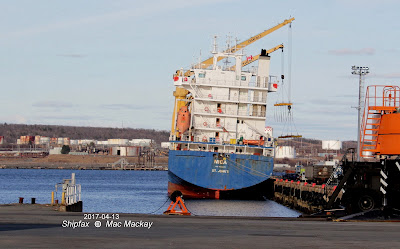 There were also ships waiting outside. The autocarrier Adriatic Highway will wait for another ship, Eridanus Leader to visit Autoport tomorrow before coming in to take its turn.
NYK Rigel will wait until 0500 hrs tomorrow to take its pilot into Fairview Cove.

The ships are anchored 7 miles from my vantage point at the Point Pleasant breakwater, and because I was only about 15 feet above sea level the ships appear to be over the horizon.

An unusual visitor did come into port to work today. Umiak I is a Canadian registered bulker, built specifically to carry nickel concentrate from the Voisey's Bay Mine in Labrador. It is built to a very high ice class, so is able to work year round from Voisey's Bay for Vale Inco delivering cargo to the Long Harbour nickel processor in Newfoundland.
This does not occupy the ship full time, so it also able to run from Deception Bay in northern Quebec's Nunavik region carrying nickel ore from Xstrata's RaglanMine. 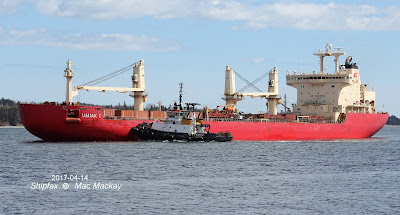 Built in 2006 by Universal Shipbuilding Co in Maizuru, Jpaan, the 22,462 grt, 31,992 dwt ship is owned by the Fednav Group. It is one of three Canadian flag extreme ice class ships in the Fednav fleet that work in the north, the other two are Arctic and Nunavik. 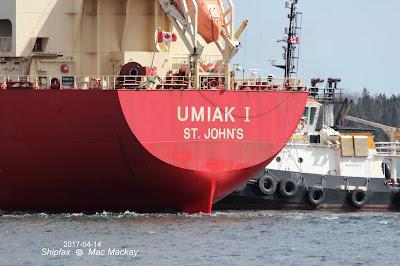