THE Alliance gears up

YM Essence takes its escort tug in the lower harbour. The ship is well laden aft - mostly with empties, judging by the ship's draft. 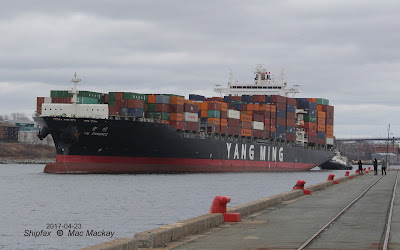 I wasn't the only shipwatcher. A group of well dressed photographers followed the ship through the inbound, getting some closeups as it passed the pier 9 knuckle. They may have been Yang Ming officials. 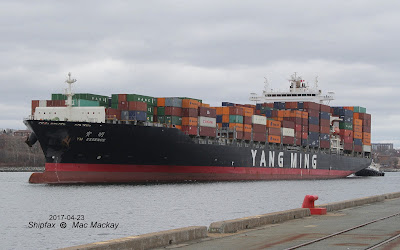 The ship favoured the western side of the channel as it made its way through the Narrows. 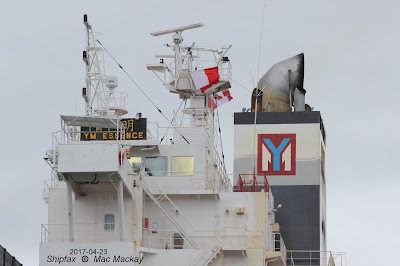 Yang Ming is new in Halifax, so it was interesting to see the company's logo and funnel marking.

THE Alliance will also be serving Halifax with its Southeast Asia / North America EC5 service, with ships from a variety of lines, including Hapag-Lloyd, APL, Evergreen, NYK and MOL. It will also have a strategic co-operation with ZIM, and at least one of its ships may be included. The service has begun, but the first ship to reach Halifax is expected to be Ningbo Express in early May..
Port rotation on that service is Laem Chabang, Cai Mep, Singapore, Colombo, Halifax, New York, Savannah, Norfolk, Halifax, Jebel Ali, Singapore, Laem Chebang.

However the ship that did arrive today, Mary is on the G6 AZX Asia-North America Eastbound leg, completing the obligations of the old consortium. 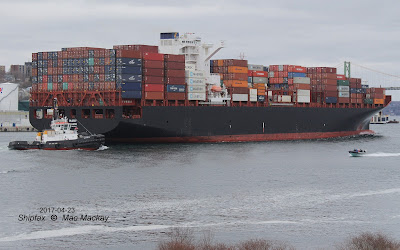 Spitfire III leans in on its line rounding the pier 9 knuckle, passing an RCN small craft out for a Sunday spin.


At present there is no scheduled THE Alliance Transpacific/Panama Canal loop that includes Halifax.