Some comings - but no goings

Another arrival at Irving Woodside with refined product from Ijmuiden, Netherlands. This time is the Swedish owned, Bahamas flagged Ami operated for Gotland Rederi AB. Other ships of the same fleet have called here many times, but usually they carry the "Gotland" name as a prefix to a woman's name, such as Gotland Sofia which was here last month. However those ships have also been from the company's "Superice" class with full width bridge. 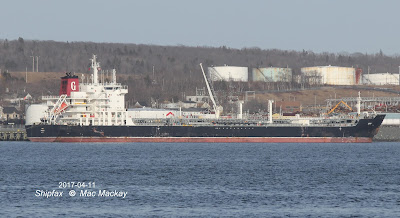 This ship has open bridge wings, so is apparently of a different class. Built in 2012 by Guangzhou Shipyard International in China, it has a grt of 24,494, but a deadweight of only 39,310 (versus about 50,000 for ships of its size.) The reason appears to be that at 183.2m x 27.4m x 11.7m, it is about 4m narrower and 1m shallower than Gotland Sofia, but the same length. According to the company web site the ship is on charter to Shell Tankers Singapore.

Nolhanava arrived on an unaccustomed day - usually it is a Thursday arrival / Friday departure on its weekly service to St-Pierre et Miquelon. After unloading at pier 41 it moved to pier 9c. The reason for which only became apparent after the ship turned to back alongside. 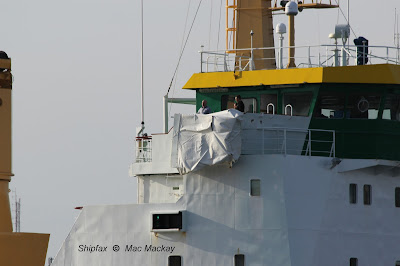 A severely crumpled starboard bridge wing - carefully tarped over, will evidently need some repair before it puts to sea again. Details I have none, except it must be a fairly recent occurrence.
In view of the coming Easter weekend it may well be into next week before the ship sails.

At pier 36, Oceanex Sanderling has been alongside ballasted down by the stern since Saturday. It did not sail on schedule and the parking lot is full of cargo awaiting conclusion of whatever repairs it is undergoing. It is so blocked from view, that there is no way of telling what may be going on near the waterline. 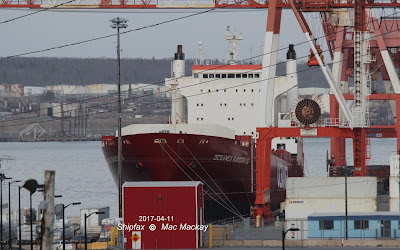 The ship had a barge alongside and a crane on shore over the weekend, but that appears to be gone now. Again - I have no details - but at a guess I would think it is thruster repairs.