Amadea inaugurated the 2017 Halifax cruise season for the third time today. The ship, operated by Phoenix Reisen of Germany, was the first ship of the year in 2008 and again in 2015. Each time it has been on the last leg of a long cruise. This year's 135 day / 136 night tour began in France, included the Mediterranean, Africa east coast, Cape of Good Hope, Brazil, South America west coast, Panama Canal, through the Caribbean. It arrived in Halifax from Boston and will be going on the St.John's (ice conditions permitting) then Ireland and Hamburg. 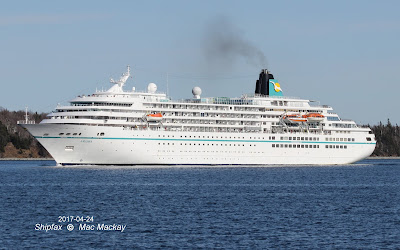 The ship arrived very much down by the stern. This was not "squat" brought about by high speed. As soon as the ship was tied up the bunkering tanker Algoma Dartmouth came alongside for refueling, so my guess is that the ship was trimmed by the stern intentionally and will be on an even keel again after taking on the new fuel. 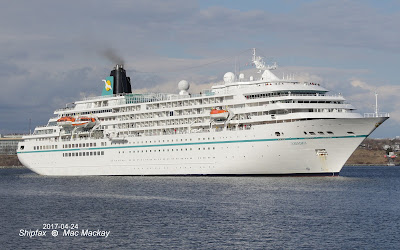 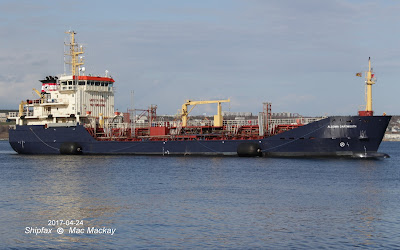 Built in 1991 by Mitsubishi Heavy Industries in Nagasaki as Asuka, the ship sailed for NYK Lines until 2006 when it was acquired the current owners, Amadea Shipping Company. Vessel management is by VShips Leisure for the charter to Phoenix Reisen.

While inbound, Amadea passed another German owned ship, the Louis S. This ship is a newcomer to the Maersk Transatlantic service, possibly covering off drydockings of the other ships. It is more than a week later than expected, so may have had trouble keeping up to the demanding Maersk schedule. This has happened before on this service when substitute ships have lagged behind the advertised dates.

Built in 2003 by Stocznia Szczecinska in Poland, the 35,881 grt, 41,833 dwt ship has a capacity of 3108 TEU including 500 reefers. It is also fitted with three 45 tonne cranes. It is registered in Antigua for Reederei Rudolf Schepers GmbH+Co. The ship was laid down as Amasia, was renamed Patricia in 2003 for Peter Doehle and renamed Libra Santos in 2004 - a name it carried until 2012.