Sunday ins and outs and no shows

Oceanex Sanderling sailed this afternoon for St.John's. While normally a Friday departure, the ship has been in port since April 8 when it was taken out of service for repairs to an ice damaged bulbous bow. Fleet mate Ocean Connaigra was also out of service in St.John's with a similar problem. A mild winter and high winds have have brought vast quantities of multi-year ice in along the Newfoundland shore. While both ships are ice strengthened, they normally only encounter year old ice. Multi-year is much tougher stuff and can cause severe damage with only slight contact. 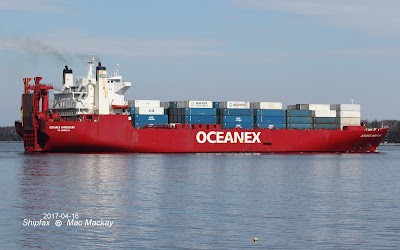 The Oceanex Sanderling is a tough veteran of the Halifax / Newfoundland trade. Built in 1977 in Sasebo, Japan it has been kept running due to its ConRo capability which would be costly to replace. Owners Oceanex claim they would replace the ship, but artificially low rates on Marine Atlantic are depriving them of rightful business and profits.

The autocarrier Adriatic Highway left anchorage off Halifax this afternoon and  made its way in toward Autoport. The ship appeared to have its anchor ready in case it was needed. 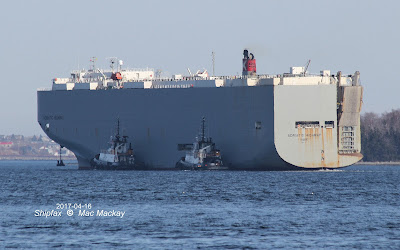 The ship has made several visits to Halifax recently, including March 19 and January 29.


On the eastbound leg of its trip for Atlantic Container Line, the Liberian flag Hammonia Antofagasta made its second call in Halifax. (It was here on the westbound leg April 7-8.  The ship is operated by Hammonia Reederei of Hamburg, a ship management company formed by ship owner Peter Dohle, fund investor  HCI Capital and General Electric Corp's ship financing arm. 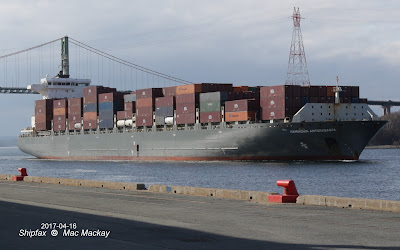 Built in 2008 by Zhejiang Yangan Shipbuilding Co Ltd [FanShip Group] it is a 32,901 grt, 35,534 dwt ship with a capacity of 2797 TEU (including 746 reefers). Originally named Antofagasta, it was named Maersk Jennings from 2008 to 2013, then became Hammonia Antofagasta. In 2016 it took up a short term charter as CMA CGM Pointe Marin and was renamed again earlier this year.

There was no ship for the Maersk / CMA CGM transatlantic service this week. Normally it would be Maersk Pembroke but that ship is reported to be in Spain, perhaps for a refit. It substitute, Louis S is due tomorrow. The tough weekly transatlantic service is maintained by just four ships, which must take a beating.

See Tugfax for another of today's arrivals.