Wonder where the Bahris went

With all the container traffic in the port (and it is up again in  the last quarter) and the proliferation of new-to-Halifax ships, it is easy to overlook the fact that one of the port's regular callers seems to have forsaken Halifax, at least for the time being. 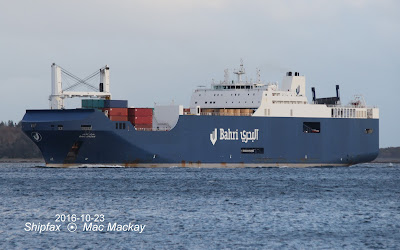 
The National Shipping Company of Saudi Arabia (Bahri) has not been seen in Halifax for since February because it has shifted its activities to Saint John, NB. The line had been making monthly calls in Halifax for many years, using pier 31 as its base until last year. Its new generation of ConRo ships came on stream from 2013 and last year it shifted operations to Fairview Cove, but that pier is so busy, the ships were sometimes forced to wait for a berth.

That is the likely reason for the shift to Saint John, which will continue monthly calls there until December when the line has two calls scheduled in Halifax again. 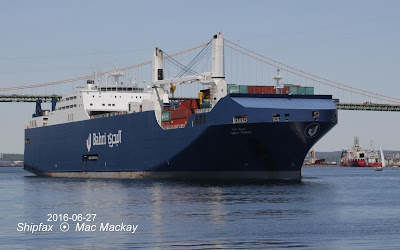 When the line shifted to Fairview Cove last year, it made it possible to see the ships up close as they transited the Narrows. (Bahri Tabuk file photo)

Perhaps Shipfax is to blame too. I frequently photographed the light armoured vehicles the line was transporting from Canada for Saudi Arabia's military. The LAVs, built by General Dynamics in London, ON were trucked to Halifax and could often be spotted in the parking lots for the piers. There has been political fallout for the Canadian government  over the manufacture and sale of the vehicles, which are not supposed to be used against the country's civilian population. The current federal Liberal government inherited the deal from the previous Conservative regime and decided to honour the contract, despite a public outcry.
The LAVs were highly visible at pier 31, and even after the move to Fairview Cove, the controversial vehicles were still visible from time to time and appeared in Shipfax and companion blog Truckfax.
Saint John is a shorter truck trip from London, ON, but also more secure from prying eyes.