The crude oil tanker Monte Toledo arrived yesterday for bunkers, and will be sailing later today. A stay of more than 24 hours is unusual for a bunker stop, but perhaps the ship is extra hungry. Its last port of call was Canaport, Saint John, NB. 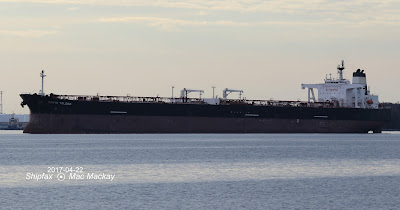 Monte Toledo at number one anchorage. In the background the bunkering tanker Algoma Dartmouth takes on more fuel at Imperial Oil.


Built in 2004 by Universal Shipbuilding in Tsu, Japan, the 78,896 grt, 150,611 dwt ship is owned by the Ibaizabal Group of Spain, but flies the Portuguese offshore flag of Madeira. Ibaizabal's tanker fleet consists of only four ships, but the company is better known for its large Spanish domestic tug fleet.


We seldom see crude tankers in Halifax anymore, unless they are here for bunkers. Since it is impractical to bunker ships at the Canaport offshore mooring buoy, most of the tankers we do see come from Saint John.