The ship Nica sailed this afternoon after discharging her cargo of nickel from Cuba (see yesterday's post). The ship belongs to the Lingenberg fleet of Albert Hauschild which specializes in smallish container feeder types. However Nica carries a pair of 40 tonne cranes, and can also carry general cargo, including the bagged nickel. 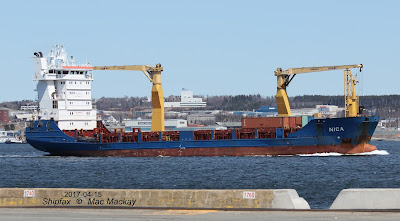 Built in 2003 by Jinling Shipyard, Nanjing, it is one of a large number of similar feeder ships.
The ship is returning to Moa, Cuba, for Nirint Lines, perhaps for more of the same cargo.

There were a pair of NYK ship movements today - hence the "seeing stars". Arriving for Autoport, the Eridanus Leader passed the awaiting Adriatic Highway (from rival K-Line) still anchored offshore - it will not come in until late tomorrow. 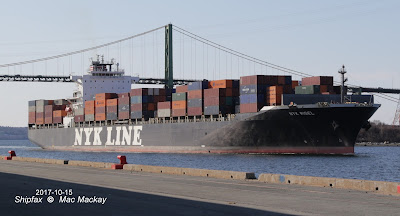 It was pictured yesterday anchored off port. 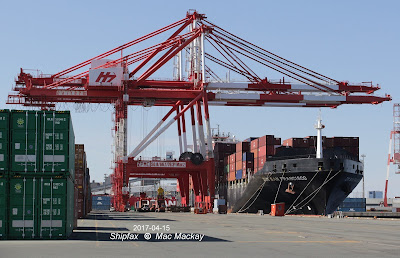 When the ship was built, its deadweight tonnage was listed as 50,963. This was increased dramatically to the current figure, when it was  determined that the deck load could be increased in height.
The ship is owned by an investment syndicate and managed by Niderelbe Schiffahrts GmbH + Co KG.