There were also several civilian ship movements in Halifax on July 15.

First was the arrival of the Netherlands flag Donaugracht for Fairview Cove. It is unusual to see ships of the Spliethoff fleet in Halifax in summer. The company has a regular container service from Europe, to the Great Lakes, but its ships will come to Halifax in the winter off season. Other ships of the fleet load forest products (usually paper) or aluminum at St.Lawrence River ports, and there is also their yacht and boat delivery service, which has called here from time to time. I was not up early enough to see if it had a deck load when it arrived today. On departure for Charleston its deck appeared largely clear, so I don't know if it loaded or unloaded cargo. 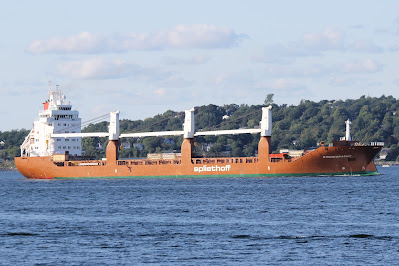 The ice class ship has the usual pontoon type moveable tween decks, box shaped holds with ventilation and dehumidification. It can also carry up to 1,062 TEU containers. 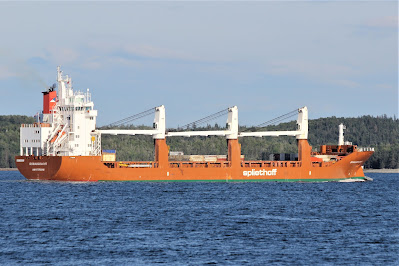 The ship sailed from Singapore June 6 and callled in Laem Chabang, Thailand June 8-11, transitted the Suez Canal June 29-30 and stopped in the Gibraltar west anchorage July 6 (perhaps for bunkers or stores).

Next in was the elderly autocarrier Treasure which went to Pier 9C to unload RoRo (non car) cargo. 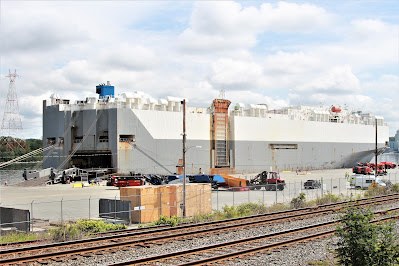 Built in 1999 by Hashihama Zosen in Tadotsu it was originally named HUAL Carolita but in 2000 became HUAL Treasure. In 2000 Leif Höegh acquired Ugland's 50% of HUAL (Höegh-Ugland Auto Liners) and in 2005 renamed the company Höegh Autoliners and the ship became Höegh Treasure in 2006. They sold the ship to current owners and it was renamed in 2014.

It is a 58,684 gt, 21,199 dwt ship with a capacity of 5,718 Car Equivalent Units. It will move to Autoport tomorrow to unload cars. The ship is apparently on a spot charter for Wallenius Wilhelmsen's SVC1 transatlantic service - possibly to cover for ships in maintenance. Its last ports of call were Bremerhaven, Zeebrugge and Southampton.

Imperial Oil's berth number 3 was not vacant long today, as Algosea sailed at 1130 hrs, and its place was taken by the Largo Excellence, which had been waiting offshore. Shipfax was asleep at the switch and did not get a picture of the ship until after it was tied up. 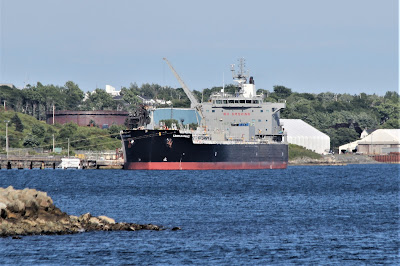 Another in the endless stream of MidRange tankers, the 29,416 gt, 50,118 dwt ship dates from 2017 when it was delivered by Hyundai-Vinashin in Ninh Hoa, Vietnam as EcoSeven. It was renamed Steanweco Elegance soon after and in 2020 assumed its current name. Its last port was Antwerp.