The twin sons of Mars and Rhea Silvia, in Roman legend, were raised by a wolf and had a falling out over where to build a new city. Romulus (or his friends) slew Remus and founded Rome on the Palatine hill and became king. Roman astronomers gave the brothers' names to "twin" stars that we can see near Orion. These Gemini twins were known by the Greeks as Castor and Pollux.

When Hyundai Samho built twelve Daedalus class ships for NYK Line, they were each given names from the constellations.  NYK Remus the ninth ship, was delivered in 2009, and NYK Romulus the eleventh, in 2010. Calculated at 55,487 gt, they were rated at 4922 TEU including 330 reefers. The NYK Remus measures 65,981 dwt and is registered in Panama. NYK Romulus is 65,883 dwt and flies the Singapore flag.

Both ships are assigned to THE Alliance's AL5 North Europe to North America service and it was inevitable that they would cross paths at some point. That happened today, July 25 as NYK Remus sailed from PSA Fairview Cove for Southampton on its eastbound leg and NYK Romulus arrived from Antwerp, westbound. 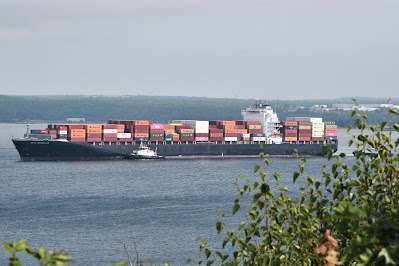 NYK Romulus preparing to turn off the berth as it arrives in Bedford Basin this morning. 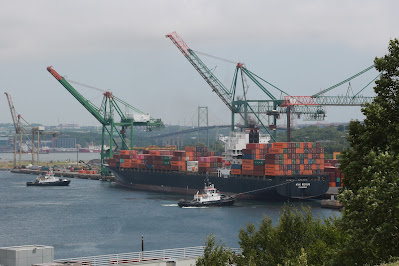 NYK Remus making up its tugs, ready to let go.

The two ships met off the berth at Fairview Cove, with NYK Remus neatly slipping out for sea as NYK Romulus was backing in to take its place.

The outbound (eastbound) ship looks slightly less laden, which would be expected as the balance of trade these days is for imports. The NYK Remus was carrying a less than a full deck load as it cleared the MacKay bridge, but had lots of empties, stacked up aft. 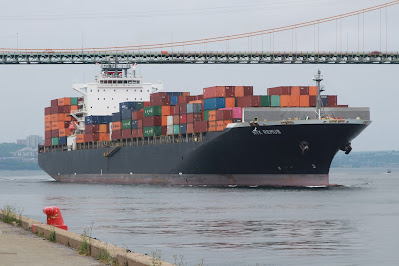 Although the three big Japanese container lines, K-Line, MOL and NYK, formed the Ocean Network Express (ONE) joint venture in 2016 to fight off competition from the larger lines, they have have been slow to rebrand their ships and fold them into the ONE stable. One reason may be that most of the ships are chartered from other owners, and the cost of renaming and repainting would not be born voluntarily. So far it is mostly new ships that have been painted in ONE's magenta hull clour.