MSC Ins and Outs [revised due to gremlins]

It was a quick change at PSA Atlantic Hub today with the departure of one MSC ship followed within an hour or so by another MSC arrival.

MSC Rossella arrived over night and tied up in the early hours of this morning July 27, one month after its previous arrival. On that visit it did not dock, but anchored for Canadian Food Inspection Agency clearance en route from Europe to Montreal. It was the ship's first visit to Canada after earlier calls in the Far East, and had to be inspected for LDA moth larva before proceeding further into Canadian waters. See my post of June 27

Since that brief visit the ship has been to Montreal, Sines, Portugal and Valenica, Spain, and is now en route back to Montreal. It presumably off loaded some cargo to reduce draft for the St.Lawrence River. 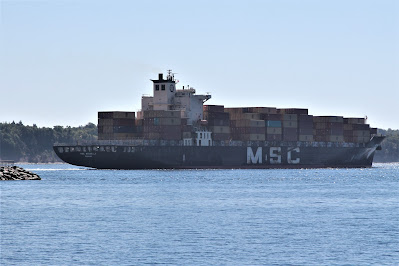 On departure the ship showed lots of empty deck space aft - perhaps to make room to load empties in Montreal. As noted in the previous post, the 3398 TEU capacity ship dates from 1993 when it was launched by Samsung Koje as Hansa Europe. Delivered as Ville de Carina, it became MSC Rossella in 1997. The relativley small size of 27,398 gt, 43,603 dwt makes the ship suitable for St.Lawrence River routes such as CANEX1.

Pier 42 was not vacant for long as the inbound MSC Santhya tied up for noon, arriving from Montreal on the CANEX 2 service. While the ship was approaching the pilot station, it projected an interesting optical phenomenon, "reflecting" an elongated version of its hull: 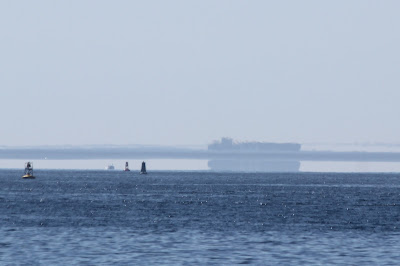 These sights are not uncommon, and can be seen off Halifax when the right conditions of very hot air and cool water prevail.

The ship eventually loomed into view in the normal form - not a mirage. 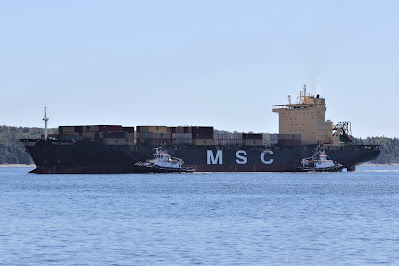 [Gremlins attacked the first version of this post, which has now been revised.]