Mitsui O.S.K. Lines of Japan, operates an auto carrier fleet of more than 110 ships (according to their website), called Auto Carrier Express, but usually abbreviated to MOL ACE. They maintain numerous routes in Asia, Oceania, Africa, Europe and the Americas, independently of other carriers.

Today's (July 26) arrival at Autoport was one of the "smaller" ships in the fleet, the Violet Ace. 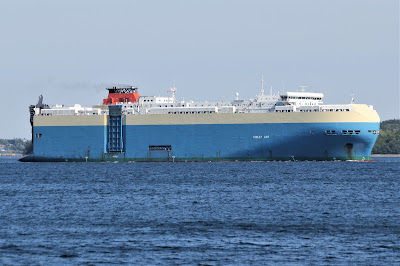 Built in 2011 by the Ha Long Shipbuilding Co in Ha Long, Vietnam, it is a 49,708 gt, 13,370 dwt vessel with a capacity of 5,000 CEU. The ships we are used to seeing at Autoport these days usually have a capacity in the 7,000 to 8,000 CEU range. The Ha Long company has recently partnered with the Damen Group of the Netherlands, but has been a state owned enterprise since 1976.

The ship is not actually owned by MOL but is chartered from Ray Car Carriers, the Israeli owned, Isle of Man based auto carrier arm of the Ungar family. Their ships are managed by Stamco Ship Management, a Greek company that manages Ray ships for all the major auto carrier fleets. Ray Car Carriers uses predominantly Bulgarian crews. 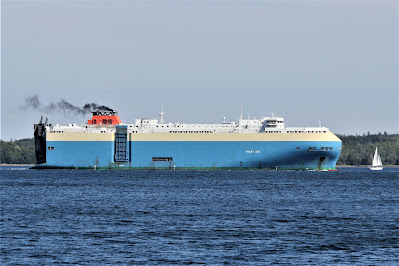 Outbound rounding Ives Knoll, the ship puffs some black smoke from its funnel, that has an unusual lattice work cap structure.

Violet Ace arrived from Emden and is bound for Houston, a distinctly different route than other auto carrier lines that usually call in Davisville, RI or New York.