The size of ships on various routes continues to increase as shipping lines cope with demand and backlogs. In some cases lines are going outside their own stable of ships with charters, but other lines are able to move ships around as needed.

THE Alliance continues to call on charters from outside its member group (HAPAG-Lloyd, Hyundai, ONE, Yang Ming) to find tonnage. Conti Contessa, owned and operated by Conti-Lines Group of Belgium, arrived again today July 20 on the EC5 service. This not its first call on this route, so it would seem to be on a longer term charter. 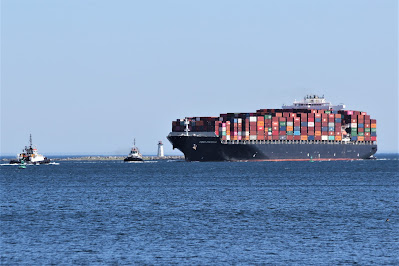 Due to its size, the ship called on three tugs (one on each side, and a tethered escort astern) as it made its way inbound to PSA Fairview Cove.

The ship is at nearly the limit for the size of ship that can reach Fairview Cove.

The Southend container terminal PSA Atlantic Hub, also handled a large ship today, but it it is well shy of the largest that can be accommodated. CMA CGM La Pérouse is a 151,446 gt, 165,422 dwt, 13,880 TEU (including 800 reefers) ship, built in 2010 by Daewoo Shipbuilding + Marine Engineering Co Ltd, Okpo. 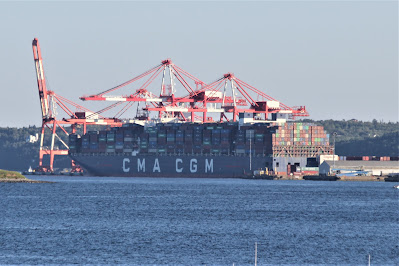 The Southend facility can handle ships of greater than 15,000 TEU - the largest ships currently calling at North American ports. Although there are now ships with 23,000 TEU capacity, ships of 20,000 TEU+ will only be running from Asia to Europe for the foreseable future.

With Pier 41 occupied, the Oceanex Sanderling moved from Autoport to Pier 36 this afternoon. For now, the ship can use the Pier 36 RoRo ramp, but that will not be the case for much longer as work to fill in the basin between Piers A-1 and B will soon be underway.

The sail excursion boat J.Farwell makes it way inbound under power, as Oceanex Sanderling crosses from Autoport to Pier 36.

The Oceanex Sanderling will be taking on RoRo cargo at Pier 36, but will have to move to Pier 41 or 42 so that cranes can load containers before the ship sails on Friday (July 22.)