Nirint Shipping, based in Barendrecht, Netherlands, operates a regular general cargo and container service between Rotterdam, Netherlands, Bilbao, Spain and the Dutch Caribbean islands of Aruba and Curacao and Cuba and returning to Europe via Halifax. The primary cargo for Halifax is nickel sulfides from Cuba. They use up to seven different ships to maintain the service, not all of which call in Halifax on every trip.

Today's arrival (July 6) has not been one of the regulars, and I believe it is making its first call in Halifax. The IJzerborg is a multi-purpose general cargo ship of the open hatch, moveable tween decks, box shaped hold type. With a hull built in 2010 by Damen Yichang, and completed in Gorinchem, it is a 8999 gt, 12,080 dwt vessel fitted with a pair of 80 tonne capacity cranes. It is also strengthened for heavy cargoes, and containers in all holds and on all hatches. The container capacity is 686 TEU and includes 80 reefer plugs. To add to the ship's utility it can carry grain, is fitted for Great Lakes trade, has hold ventilation, dehumidification and CO2, and is Ice Class 1A Swedish/Finnish. Its tween decks are removable and can be installed as temporary bulkheads. (Sister ship IJsselborg has called in Halifax numeorus times in 2016, 2018, 2020 and 2021.) 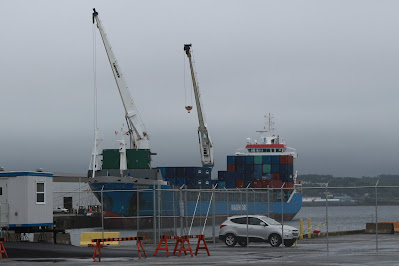 Despite today's heavy rain, the ship was seen working cargo, which I appears to be nickel sulfides in bulk bags, which protect it from weather. The doors to the Pier 27 shed were open, so I expect the bags were forklifted to the shed for storage. They will eventually be loaded on open gondola rail cars for Sherritt International's refinery in Fort Saskatchewan, AB.

Recent work at Pier 29 (in the foreground of the photos) has involved installation of a weigh scale for dump trucks to deliver pyritic slate to be used to infill the pier A-1 / Pier B  basin. That means, at least for now, a much clearer view of proceedings at Pier 27 and 28, although there are new fences in between. 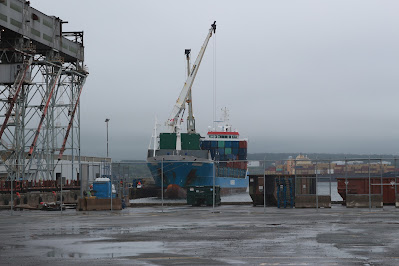 In the misty background MSC Manzanillo is in number one anchorage. After working cargo at PSA Halifax Atlantic Hub, the ship returned to anchor. (See yesterday's post.) 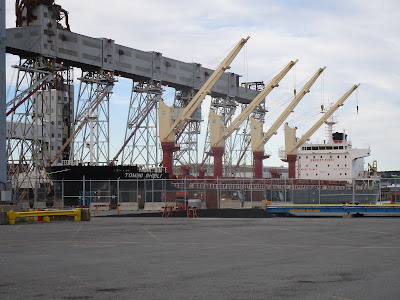 Another visitor in Halifax today is the always popular Queen Mary 2. The ship's arrival and departure drew the usual crowds, despite the weather. I did not make an effort to take a photo this time because I have many pictures already, and taken in good conditions, such as: 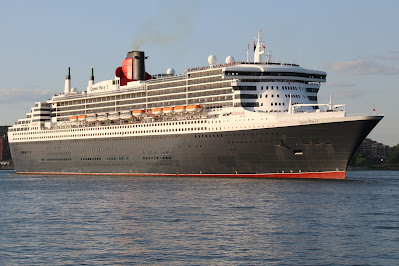