Return of the Rhone

The French naval vessel Rhône paid a return visit to Halifax this morning - emerging from thick fog as it approached Jetty 3 in HMC Dockyard. 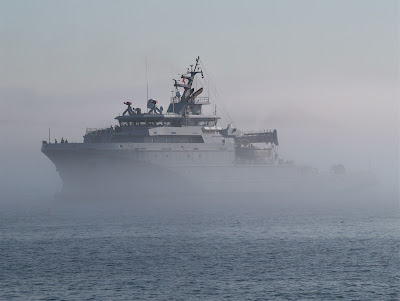 Rhône is designated A603, and classed in French terminology as BSAH, "batiment de soutien et d'assistance hauturier" [meaning offshore support and assistance] indicating its multi-functional role as a deep sea towing and rescue tug. It is also equipped to deal with port work, carrying a 300m pollution barrier, supporting twelve divers and transporting weapons and ammunition.

Its was designed to be able to tow nuclear submarines in case of major damage, and to retrieve the towed arrays when they enter port. It was designed to tow a nuke at 5 knots in sea state 7 (9 meter seas). Itis a member of the Loire class of twin screw vessels with 80 tonne bollard pull, from 7200 bhp main engines. They carry equipment for dynamic positioning DP1 and firefighting FiFi-1.

The vessel is based in St-Pierre et Miquelon and carries out sovereignty patrols and stands by for search and rescue and other duties, including disaster relief and courtesy calls such as this. 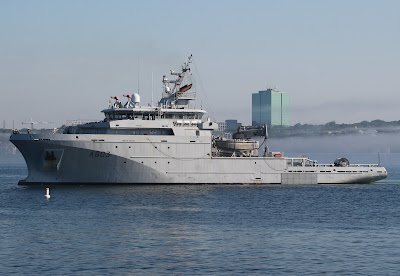