Alice Oldendorff in for repairs

1. Alice Oldendorff approaches pier 9. The five hoppers (one for each hold) are prominent on deck. 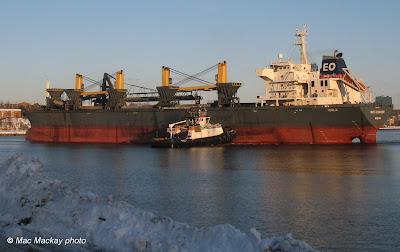 2. Atlantic Fir swings the ship to back in to pier 9B. 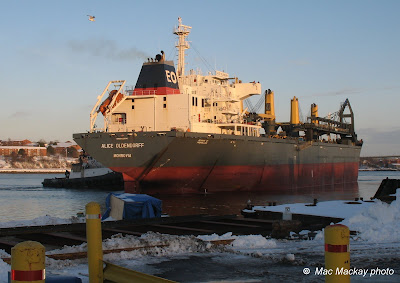 3. The self-unloading boom is stowed on the starboard side of the deck, with a gantry mounted forward to swing it out over the dock. Just ahead of the house along the rail are two front end loaders, used to gather up the cargo in the holds

The self-discharging bulker Alice Oldendorff tied up at pier 9A this afternoon for some minor repairs. The ship is an off and on caller in Halifax for gypsum, and is part of the CSL International Pool of self-unloaders that carry gypsum, coal, aggregates and other bulk commodities up and down the east coast.
[The pool consists of ships from CSLI, Oldendorff Carriers, Torvald Klaveness, Algoma and Marbulk. Each of these is a shipowner in its own right and except for Marbulk (50/50 CSL and Algoma) has its own web site - all worth a look: http://www.oldendorff.com/ ; http://www.klaveness.com/ ; http://www.algonet.com/ ]
Flying the Liberian flag, Alice Oldendorff was built in 2000 at Shanghai Shipyard. Her gross tonnage is 28,747 and deadweight is an even 48,000 tonnes.
The ship is a hybrid self-unloader. Her four 30 tonne deck cranes are used to unload by means of clamshell buckets into deck hoppers. These in turn feed a deck-mounted conveyor belt system connected to a slewing conveyor boom. The boom will swing out over the dock to land the cargo. Because the hoppers control the flow of material, there is a steady stream of discharge, allowing for more precision in the placement of the cargo in stockpiles. The on-deck hopper/conveyor system can be retrofitted to a conventional geared bulker at a lower cost than constructing a self-contained gravity fed unloading belt system [see following story on Georgia S] The downside is more labour intensive/equipment intensive use of the cranes and slower unloading speed. Payload may be greater however, since the holds are flat bottomed instead of hopper shaped. Note the wheel loaders on deck that are used to reach the far corners of the holds and feed the last "crumbs" of cargo to the clamshells.
Repairs will be carried out by Marener Industries, a ship repair and boat building operation based at pier 9B. http://www.marener.ca/
The ship's complete specs can be found on the CSL International Web site: http://www.cslint.com/
and http://www.cslint.com/pdf_specs/AO-AliceOldendorff.pdf
.
Posted by Mac at 7:10 PM