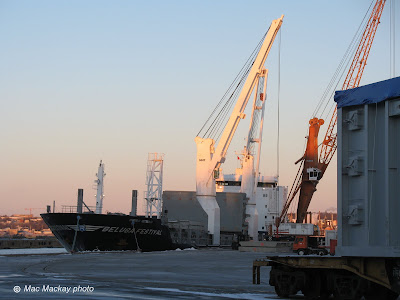 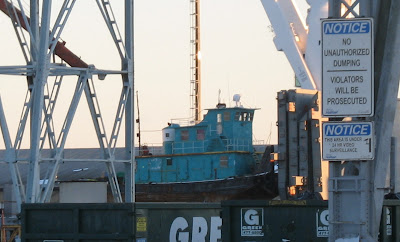 2. A pusher tug is on the ship's deck, but hidden from view behind an open hatch cover.

Material has been accumulating on pier 30 since December for a major project cargo lift to Africa. Consisting of what appear to be boiler plant components, the large steel fabrications have been arriving by train and truck.
On Sunday evening the Beluga Festival arrived and on Monday work got underway to take on the cargo. Beluga Festival is another of those ubiquitous Beluga ships, designed to carry heavy lifts and project cargoes. Built in 2010 it is a 9611 gross tons vessel, German owned and registered in Antigua. As an example of its versatility, it was in Belledune, NB in September unloading wind turbines. It then went to the Great Lakes and loaded grain in Duluth. It was reported in Gibraltar at the end of October taking bunkers and bound for Italy. Then last month it unloaded 10,000 tones of reinforcing steel at Panama for the new Panama Canal project.
At some point it was in the southern US and picked up a shallow draft pusher tug which it loaded on deck. It is not visible in the bow shot because the open hatch is in the way. That it could do with ease. It has two 180 tonne capacity cranes than can be combined to lift 360 tonnes.
Also on the dock are some of the pontoon type tween decks which are removable in sections to suit cargo configurations.
.
Posted by Mac at 8:30 AM