Atlantic Concert finally gets away 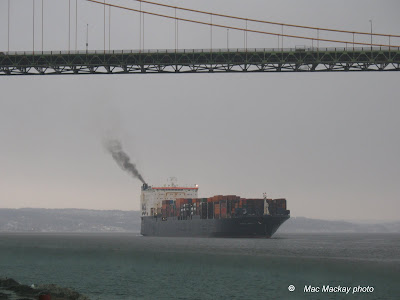 1. Atlantic Concert revs up to pass under the MacKay bridge at 0830 this morning in blowing rain.
Atlantic Concert arrived on Wednesday February 16 with two stowaways aboard. The two had apparently boarded the ship in Liverpool, UK, ten days before. The Canadian Border Services Agency (CBSA) is not releasing much information about the incident, but it is most likely that their presence was detected by the crew before the ship arrived in Halifax.
The ship was held in port while the two were removed (they have apparently applied for refugee status in Canada) and a full scale search conducted to see if there were any more on board.
Stowaways are unusual on the North Atlantic in winter, but the Atlantic Companion and its sister ships of the Atlantic Container Line (ACL) are not typical container ships.
As the largest RoRo/LoLo (Roll on Roll off/Lift on Lift off) ships in the world, they are in reality huge floating garages with many internal decks to stow trailers, cars, and other rolling goods, as well as conventional deck loaded containers. Built specifically for ACL's transatlantic service, the ship run on a tightly organized schedule with weekly eastbound and westbound calls in Halifax. They have been targeted by human smugglers before, since they are a fairly quick way to get across the Atlantic, have lots of places to hide, and stop in Canada first before going on to the US.
The ship was built in 1984 and lengthened in 1987. Between 1987 and 1994 the ship was renamed Concert Express when HAPAG-Lloyd and ACL ran a coordinated service. Otherwise the ship has lead an uneventful existence plying its route in strict rotation with the other ships in the fleet.
Because the ship was not able to get away until this morning, that schedule must be in a bit of a mess at this point, however it will probably be made up by skipping some US ports and its eastbound call in Halifax. The ship is giving Baltimore as its next port.

Atlantic Container line is part of the Grimaldi Group of Italy, but its ships still fly the Swedish flag reflecting some of the orginal founding owners of ACL. Crew services and other management has recently passed from Rederi AB Transatlantic to other operators.
.
Posted by Mac at 9:08 AM