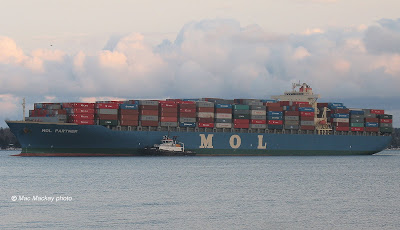 MOL Partner arrived at 1700 hrs on February 10, and the tug Atlantic Willow came alongside to move her into the berth at Halterm. The ship is typical of the post-Panamax ships on the Mitsui OSK Line roster. Built in 2005, 71,902 gross tons and with a capacity of 6350 TEU, the ship is also capable of 26 knots. In these days of slow steaming she probably seldom achieves that speed. Events in Egypt may have a bearing on that however.
If ships are forced to divert to the Cape of Good Hope route instead of the Suez Canal they will certainly have to speed up to maintain weekly schedules. Lines will have to add at least two ships to their Asia/Europe loops as well. It has been estimated that up to 100 more ships would be needed to maintain current levels of service!
According to Aplhaliner the sailing distance from Singapore to Rotterdam via Suez is 8,300 nautical miles, taking 18 days at 20 knots.
Via the Cape it is 11,800 nautical miles and 25 days at 20 knots.
[see also October 10, 2010 posting on this ship]
Posted by Mac at 8:24 AM