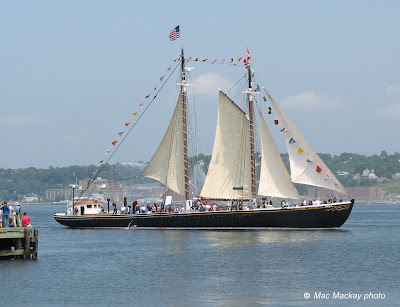 1. Sherman Zwicker in Halifax 2007-07-16 Parade of Sail. This photo also appears on the ship's website (with my permission.)

The banks schooner Sherman Zwicker is still looking for a new home. Built in 1942 by Smith & Rhuland Shipyard in Lunenburg, the vessel has operated out of Boothbay, Maine since 1968. Owners Grand Banks Schooner Trust are seeking a new owner, preferably in Canada, to take over the schooner, maintain it and make it available to the public. They have been looking for a new owner for at least ten years and interest in Newfoundland, Prince Edward Island and Nova Scotia has been notably muted.
She is one of the last schooners to fish the Grand Banks from dories, still in original condition. Built for F. Homer Zwicker of Lunenburg (Zwicker & Co) she fished out of Nova Scotia for all but a few years. In her last days in Nova Scotia she fished out of Louisbourg on Western Bank in season, but could not attract enough crew to use all eleven of her dories. In 1959, she was fishing eight dories, with a crew of eighteen, all from Newfoundland.
At that time there were about eight other salt bankers still fishing from Nova Scotia with dories, and salting their catch on board. Five were out of Riverport and three out of Lunenburg. Before refrigeration and icing was available to fishermen, salting fish was the only way to preserve the catch. In 1900 there were more than 100 salt bankers fishing from Nova Scotia alone. This was down to 15 in 1954. In the 1950s and 1960s trawlers were built by the scores, and frozen fish became a more lucrative market. In 1963 political unrest in Haiti cut off one of the major salt fish markets, and the trade went into a steep decline.
Sherman Zwicker was sold to owners in Glovertown, Newfoundland, where she was employed for a few years, but laid up until sold to George McEvoy of the US. He had the vision to retrieve the schooner, and restore her to original condition. She was built as a motor schooner with a 240 bhp Fairbanks Morse engine and is 144 feet long. Unlike the original Bluenose (built at the same yard) she is not fitted with topmasts or bowsprit, and was built strictly for work, and was never a racer. In fact she is more representational of the typical workaday banking schooner than the Bluenose.

Nonetheless she is a significant vessel and it would be a shame if no one stepped forward to save her. She is in need of significant expenditure, and that may be what is holding people back. Her hull is obviously hogged and despite years of TLC from McEvoy it is probably time for a rebuild. Perhaps not as drastic as Bluenose II is getting, but extensive nonetheless. As the Bluenose II project proves we certainly still have the skills in Nova Scotia to do such a rebuild, and the schooner would certainly seem to belong here is anywhere.

See: http://www.schoonermuseum.org/ and many other web entries under her name.