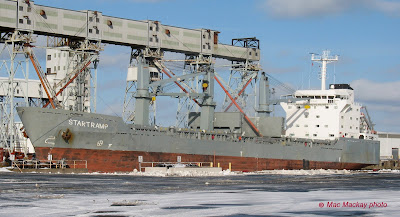 1. Under the spouts at pier 28, Startramp is taking cargo from the grain elevators. Both grain and wood pellets are stored in the elevator.

The grain gallery has been busy the last few days with African Evergreen in to load food aid grain, then her space taken immediately by Startramp - which appears to be loading wood pellets.
.
A first time caller in Halifax, Startramp was built in 2007 in Indonesia, and operated by Korkyra Shipping of Korcula, Croatia. Until 2007 it was registered in Croatia, but now flies the flag of the Marshal Islands. See http://www.korship.com/ for info on those owners.
.
It is an open hatch bulker -meaning that it has large hatches and holds of the same of width and length, allowing it to load a variety of cargo types. It is also fitted with three cranes. A ship of 12,899 gross tons, its deadweight tonnage is 18,615.
Posted by Mac at 12:20 PM