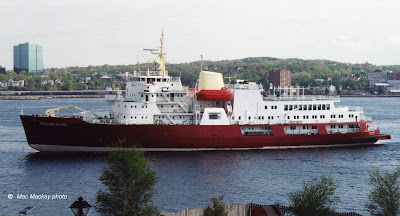 1. Polar Star arriving Halifax 2001-05-18 following conversion work at Verreault shipyard in Méchins, QC. There was still fitting out work to do before the ship went into service.


Karlsen Shipping of Halifax operates Polar Star Expeditions and the icebreaking expedition ship Polar Star, in the arctic in summer and antarctic in (our) winter. Last summer the ship was aground in Norway, and now it has grounded on the Antarctic Peninsula.
On January 31 while en route from Antarctica to Argentina it fetched up on Detaille Island. Early reports indicate that the ship's outer hull was punctured. All 80 passengers and 35 crew were reported safe, and damage is minimal, but the Argentine navy may be evacuating all the passengers. The ship is the former Swedish icebreaker Njord, built in 1969 and was acquired and refitted for cruising in 2000.
This a breaking story, so more news will likely be coming in frequently-check for updates. 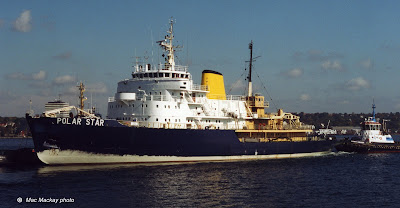 2. Polar Star leaving Halifax 2000-10-14 for Méchins, QC. The tug Point Carroll is making up to tow the ship, with Point Valiant assisting off the stern. Some conversion work was done in Halifax. 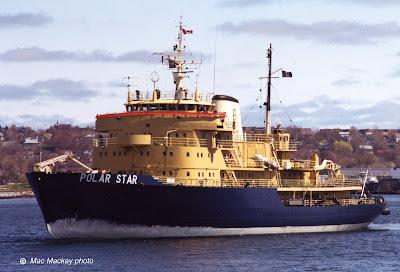 3. Polar Star arriving in Halifax for the first time 2000-05-13.
.
Update:
After 6 to 7 hours hung up on the rock, Polar Star was given permission to sail, still with passengers aboard. It is heading for the South Shetland Islands, where it will stop at a Polish research base. Divers will conduct a survey before the ship retunrs to Ushuaia, Argentina.
The rock was apparently uncharted as is often the case in remote regions.
Update Feb 4:
Passengers were removed from the ship on arrival at South Shetlands and will be transferred to Ushuaia by other means. Extent of damage to the ship has not been released by Karlsen. Sunday's departure from Ushuaia has been cancelled.
Posted by Mac at 10:04 AM