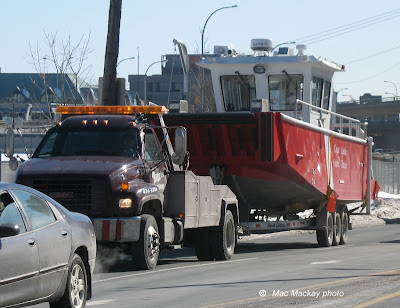 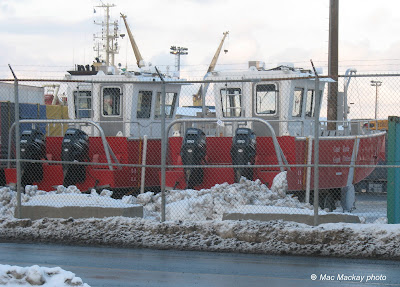 The Canadian Coast Guard is taking delivery of fifteen new oil spill/pollution control boats. All the boats are built by C&W Industrial Fabrication of Bay Bulls, Newfoundland and will be based in Newfoundland, the Maritimes, Quebec, Ontario and British Columbia.
The first two I have seen arrived in Halifax last week on Thebeland (filling in for Ocean Sanderling on the Halifax/ St.John's route)
The 30 ft x 15 ft aluminum boats are powered by two 150 hp outboard motors and will be used for boom deployment, spill cleanup and other similar work. As is apparent from the photos they are trailerable and can thus be deployed throughout the region from a central base.
The total contract value was $2.5 mn.
Another contract for 40 foot x 15 foot boats is also underway, with Marener in Halifax. - More on those later.
.
Posted by Mac at 9:10 PM