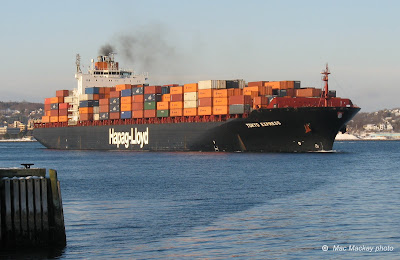 HAPAG-Lloyd, the world's fifth largest container line, and Halifax's largest container customer is apparently set to be "floated" by IPO. The shipping company is now owned 49.8% by TUI a German travel company and 50.2% by the Albert Ballin Group (which consists of an number of backers.)
TUI has been trying to unload its share of H-L for several years, but the economy stalled efforts to float it on the stock market. A return to prosperity by Maersk (the world's largest) and a settling down of concerns about MSC and CMA/CGM (the #2 and #3 lines) have lead to reports that TUI will soon be making a move to sell about half of its current stake by IPO.
There is still concern among financiers as to who might be in the market for such a small chunk of H-L, since most major players would want a majority. There is also the issue of whether H-L is profitable enough to bring in a good price. Time will tell.
.
In the meantime HAPAG-Lloyd continues to stream in and out of Halifax on a regular schedule.
.
Posted by Mac at 9:52 AM