Never to be seen again? 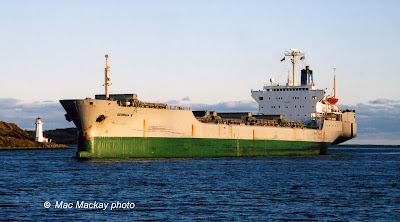 When Georgia S. sailed on January 25 [see January 27 post] I was not aware that it was likely the last time we will ever see the ship in Halifax. A familiar sight for thirty years and almost a fixture since 2009, the ship has been reassigned. It was the final ship in a series of self-unloading bulkers developed by Ole Skaarup, a New York based shipping entrepreneur and visionary.

2. Melvin H. Baker was the first ship built to Ole Skaarup's concept.
.
He is credited with developing the modern self-unloader [simultaneous developments were occurring on the Great Lakes and elsewhere however, so he was not the originator of the idea.] His pioneering ship was the Melvin H.Baker named for the founder of National Gypsum, and built specifically to carry gypsum from Halifax to east coast US ports. It sailed out of Halifax from August 10, 1956 through to March 9, 1994, making thousands of trips and then worked in the orient until it was delivered to the breakers in China December 23, 2009. Melvin H.Baker was built by AG Weser in Bremen, Germany and measured 10,884 gross tons. Its deadweight capacity was 16, 894 as built, later revised to 12,258 gross and 17,940 tonnes deadweight.
.
There were two near sisters in the Skaarup fleet, Inverness ex Lewis R. Sanderson 10,032/56 and Dartmouth ex William M. Currie 11,416/56 , both eventually carrying Nova Scotia names, and also specialized gypsum carriers, but they were not frequent callers in Halifax. Instead they loaded in the Bras D'or Lakes and Strait of Canso. 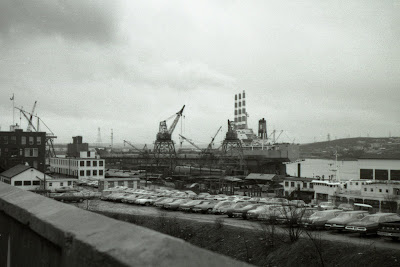 In 1974 Skaarup took delivery of a larger version of the ocean going self-unloader. Colon Brown was built by Sasebo Heavy Industries in Japan, and was a vessel of 15,471 gross tons 26,556 deadweight. Early in its service it ran into trouble off Halifax in a storm. It returned to port and was intentionally beached in Macnab's Cove April 4, 1975 to prevent it from sinking. It was badly damaged, but was patched up enough to send back to Sasebo for rebuilding. A new cargo section was fabricated and the existing bow and stern attached, forming a new ship named Gold Bond Conveyor, 14,941 gross, 26,608 deadweight.

4. The rebuilt and renamed Gold Bond Conveyor 1992-05-21.
.
On March 13, 1993 Gold Bond Conveyor left Halifax fully loaded with gypsum and was caught in the "storm of the century." It sank with the loss of all 33 aboard, 180 miles south of Cape Sable, in the Gulf of Maine. An air rescue crew was helpless to save the crew due to the extreme weather.

Meanwhile Skaarup had the cargo section of Colon Brown rebuilt and a new bow and stern built and attached by Sasebo in 1978. It was named the Gold Bond Trailblazer and measured 14,956 gross tons (later 18,241) and 26,608 deadweight. It was also an on/again off again caller in Halifax, but in 1998 it was acquired by CSL International and renamed CSL Trailblazer. It is still operating in the CSL International pool on the west coast of North America, last reported in Baha California 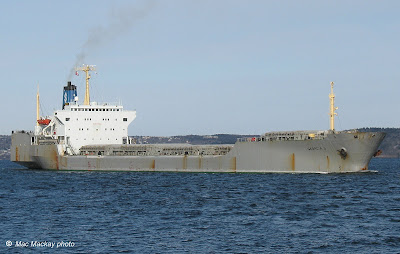 6. Georgia S. sailing from Halifax for the last time 2011-01-25.
.
In 1981 Skaarup went back to Sasebo for another evolution of the basic design. This became Georgia S. measuring 15,462 gross tons, 30,187 deadweight. It is a very similar ship to the previous ones, but with some differences. The superstructure aft is the same as that of the Trailblazer, one deck lower than the Colon Brown/ Conveyor. I believe this was done to enhance the ship's stability, but I have no confirmation. The most significant difference is the raised bow forward, in way of number one hatch. This may also have been in response to seakeeping experience with the other ships. Certainly a number of sudden bulk carrier losses were attributed to the collapse of the number one hatch in extreme sea conditions.
Georgia S. was built to deliver gypsum at four National Gypsum plants on the US east coast. However in the recent recession all but one of those plants was closed. Georgia S. arrived in Halifax May 8, 2009 and entered long periods of idleness anchored in Bedford Basin. It continued to service the Burlington, NJ National Gypsum plant when needed, but otherwise sat at anchor with a full crew aboard and ready to sail. It was obliged to serve only National Gypsum as part of its contract with CSL International. That contract has apparently now expired, and the the ship can be assigned to other work.
It sailed from Halifax January 25, and after unloading in Burlington headed for Panama. I understand that it will be drydocked, and then other work will be found, likely in China.
.
Posted by Mac at 7:53 PM