1. British Esteem has her anchor down and the launch Halmar has disembarked the pilot. 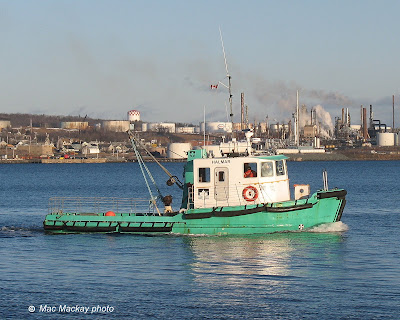 2. Halmar returns the pilot to shore.

The tanker British Esteem anchored this afternoon for bunkers after discharging at Saint John, NB. The chemical/ products carrier belongs to British Petroleum and is registered in the UK. It was built in 2003 and is 23,235 gross tons, 37,220 deadweight. It has called in Halifax several times before.
On its way to Saint on February 17, it participated in the search for a missing seaman from the bulk carrier Elbe Max. That ship was 435 miles southeast of Newfoundland en route US to Hamburg, Germany, when it reported a man washed overboard by high seas. Despite air searches by the US Coast Guard, the man was not found and is presumed lost.
The launch Halmar is operated by Dominion Diving Ltd, which has a contract to transport pilots in the harbour when the pilot boat is away from base. Built in 1960 by Halifax Shipyard for its own use, it was extensively rebuilt in 2009, re-engined, and fitted with a bow thruster.
Posted by Mac at 7:49 PM