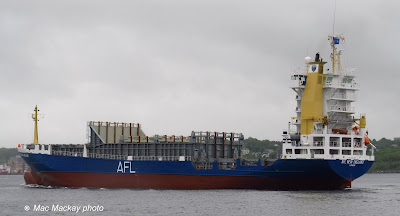 2. The ship's distinctive looks are at least in part due to the open hold design.

American Feeder Lines is now in business, with its first arrival in Halifax today. The line has been established under a US government mandate to get trucks off the roads and to parallel the main US Interstate highways with sea lanes.
The company will eventually build ships in the US for services up and down the east coast, but in the meantime they have chartered the German owned AFL New England.
Built at the [sadly now defunct]* J.J.Sietas yard in Hamburg in 1996, the ship was originally called Hohebank, but has carried the following names: 1996: Pentland, 1997: Susan Borchard, 2001: Hohebank, 2003: Hohesand. It was renamed AFL New England in May especially for this service. * [Sorry, the yard was apparently rescued by new management in 2010 after being in the hands of the Sietas family since 1653.]
The ship is an interesting one, built with a hatchless main hold. The forward end of the ship has conventional hatches, and the deck is raised. There is then a large dam to protect the open hold, and to form a frame for container carrying cells. There is then a third hold with hatches. The superstructure is perched on the stern to maximize deck space, but the engine is located forward of the superstructure. She is a similar configuration to Ocean Avalon, built in the same yard in 2004, but it is a much larger ship. The principal of the open hold design is that it speeds loading and unloading. Most containers do not need weather protection, and can happily stack on top of each other without the need of hatch covers to support part of the load. Removal and stowage of hatches takes time and space, which can delay timely turnarounds. The open hold is designed so that it can be drained of rain or incoming seawater by pumping, and the ship has inherent stability in case of pump failure.
This ship measures 6362 gross tons and has a capacity of 700 TEU, of which 100 may be refrigerated.
AFL will operate a weekly service out of Halifax to Portland, Maine and Boston initially for Hapag-Lloyd, but also for other lines such as Zim. The ship is painted blue, the same colour as a previous feeder ship, Yankee Clipper, which maintained a similar service from 1980 to 1993. AFL New England will feed containers to and from New England, and reduce congestion and truck traffic into US ports such as New York.
.
Posted by Mac at 4:49 PM