Fairchem Friesian in for a pit stop

1. Fairchem Friesian at anchor with the bunkering tanker Algoma Dartmouth alongside. The large safety warnings seem to appear on all tankers nowadays, but sometimes in a different order. 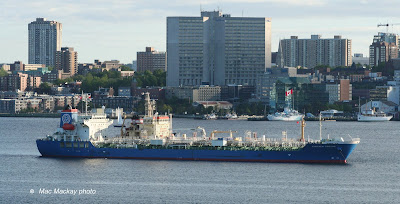 2. With the ever expanding (vertically) Halifax skyline behind, the historic corvette Sackville and survey ship Acadia are visible on the waterfront. Sharp eyes will also pick out the pilot boats just above amidships.

The chemical tanker Fairchem Friesian arrived this afternoon to top up on bunker fuel. Built in 2009, the ship measures 11,640 gross tons ands 21,206 deadweight. It is registered in the Marshall Islands, now the favoured flag of convenience for tankers.

The ship is operated by Fairfield Chemical Carriers Inc of Wilton, CT. By operated, I mean that the ship's commercial operation is managed by Fairfield. A 23 tanker company that specializes in chemical, clean petroleum, vegetable oil, lubricating oil, acids and molasses using tankers with stainless steel tanks. They find cargoes for the ships and direct them as to where they go.

However the ship is managed by Ango-Eastern Ship Management of Singapore. They would likely provide crews and look after day to day operations. The ship is owned by Eurus Maritime SA, also of Singapore, a single ship company whose address is the same as Anglo-Eastern.

The ship is very tidy looking, with an elaborate funnel marking of five circles within a compass rose.
Posted by Mac at 8:34 PM