Coast Guard veteran on the move

The former CCGS Tupper will be on the move tomorrow. The veteran, long retired from active duty, has lying at the former Dartmouth Marine Slip LongWharf for more than five years. A new residential development at the former shipyard site has forced the ship out. 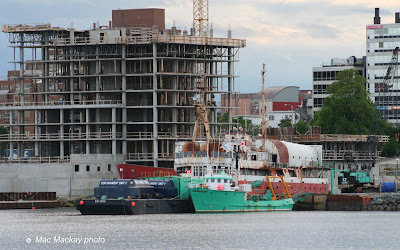 1. Dominon Victory, in the foreground, ready to tow the boarded up and gutted out former Tupper, tomorrow morning. 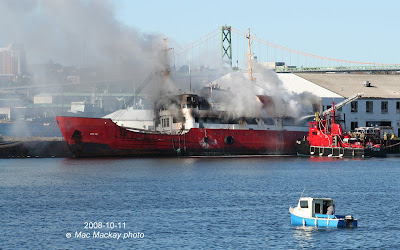 2. Not her finest moment. CFAV Firebird at work to put out the blaze. She was officially named Caruso, but still had 1998-05 on her bow. 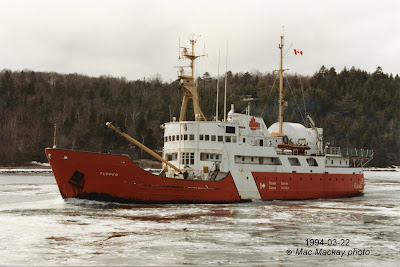 3. CCGS Tupper in her heyday, doing an easy job breaking spring ice in the Northwest Arm of Halifax Harbour. Her Fairbanks Morses are just singing.


Built in 1959 by Marine Industries Ltd of Sorel, Tupper was one of a pair (the other was Simon Fraser, built by Burrard Dry Dock in North Vancouver.) It worked from Dartmouth and Charlottetown as a buoy tender and light icebreaker. A diesel electric vessel, she was powered by two 8 cyl Fairbanks Morse (built by Canadian Locomotive Works) totalling 3280 bhp, through two 1150kW generators connected to two electric motors totalling 2900 shp, giving 13 1/2 knots.

With accommodation for 38 crew, including helicopter pilots and mechanics, the ship was a classic Canadian Coast Guard vessel of the era.

The ship was laid up May 5, 1996 and in 1998 was renamed 1998-05 prior to her sale, which was accomplished in April 2000. Her new owners had the intention of converting Tupper and Simon Fraser to expedition tour/ yachts, but the project stalled during the rebuilding of Simon Fraser in Italy.

The only thing that happened to Tupper was to be renamed Caruso and registered in Panama. That name has never appeared in paint however, and she is still referred to as Tupper.

Caruso started moving around Halifax harbour, always in tow, and eventually on July 5, 2005 was towed by Atlantic Oak to Sheet Harbour when her space at the IEL dock was needed by Irving Shipbuilding. The same tug towed her back to Halifax in December 19, 2005 and she has sat at the Long Wharf ever since.

On October 11, 2008 a fire broke out on board, and it was eventually extinguished by land units and CFAV Firebird. I expect that the interior is now completely gutted.

The poor old ship must be on her last legs by now, and it will be sad to see her go. (I expect she is on her way back to Sheet Harbour, but that is to be confirmed.)
Update: Not Sheet Harbour, but an unnamed port on the Eastern Shore, to be broken up for scrap.