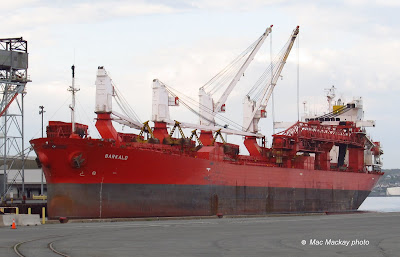 The self-discharging bulk carrier Barkald arrived May 31 for some maintenance work at pier 27. Built in 2010 by Oshima Shipbuilding in 2002, it measures 28, 924 gross, 49463 deadweight.
It is fitted with four cranes that feed a deck-mounted conveyor and boom unloading system.
While it has been a caller in Halifax for gypsum in the past, it has not been here recently. It is a frequent caller at the Strait of Canso however, loading stone at Cape Porcupine in Auld's Cove.
It is owned by Klaveness Shipping of Norway and is part of the CSL International pool of self-unloaders. It originally carried Norwegian International registry, but since 2005 has been registered in the Marshal Islands.
.
Posted by Mac at 7:50 PM