Another Canadian ship is off to the scrappers in Turkey. Saunière left Montreal on Friday in tow of the Greek tug Panormitis, with the Canadian tug Molly M 1 (ex Point Vigour) on a stern line as far as the Escoumins pilot station.
Built way back in 1970 by Lithgows East Yard in Port Glasgow, Scotland, it was a conventional gearless bulk carrier, initially named Brooknes for "Langra" Schiffs. of Germany. It was 520 feet long, 13,098 gross tons, 21,450 deadweight.
Algoma Central Corp acquired the ship in 1975, renaming it Algosea. One of the chief attractions of the ship was that it was 74'-10" wide, allowing it access to the St. Lawrence Seaway, which then restricted ships to 75' wide. Algoma sent the ship to Swan Hunter Ship Repairers in North Shields where a complete new mid-body was built to lengthen the ship to 642'-10", increasing its tonnages to 16,709 gross tons and 23,750 deadweight tonnes. The new mid body was fitted with three rows of hoppers to accommodate self unloading gear. The ship also received a new wheelhouse, raised about one full deck higher that the original one, to provide visibility over the self-unloading gear. The ship sailed to Canada for installation of the self-unloader equipment and boom by Algoma's subsidiary Herb Fraser & Associates at Port Colborne, ON.
The ship then sailed directly to Halifax arriving in January 1977 when she tied up at pier 36. The refit work was probably completed here. The ship then traded deep sea and on the Lakes. 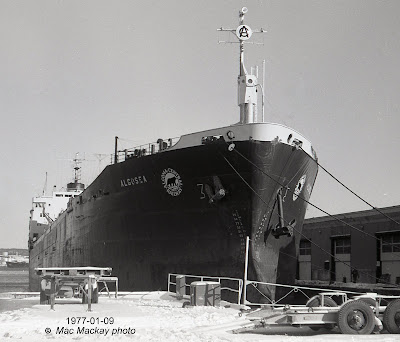 1. Algosea at pier 36 in January 1977. The emblem of her former owners has been mostly ground off her bow. Her orginal bulbous bow is visible in this shot.

In 1981 the ship received new MaK engines at Saint John. These 6 cylinder units of 8784 total bhp replaced her original 8 cylinder Helsingors of 8800 bhp.In 1982 the ship was sent to Port Arthur Shipbuilding for installation of a new bow (and bow thrister). This modified bulbous bow is similar to those on several of the Algoma and CSL ships, and features a sharp leading edge, providing some additional capability in ice. The same year Algoma signed the ship to a long term charter to carry salt from the Magdalen Islands for SOQUEM (Société québecoise d'exploration minière) and the ship was renamed Saunière. (literally: salt-bin)
In 1985 the Province of Quebec sold the salt operation to the Canadian Salt Co., part of the Morton salt conglomerate, but the charter continued. 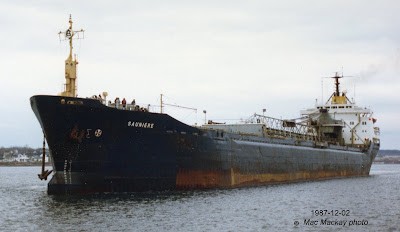 2. Sauniére arriving in Sydney, NS in 1987. Her new bulbous bow is recently repainted.

On January 21, 1999 the ship arrived at Halifax Shipyard where it received a major refit, lasting until April 6. Then in December 2001 it entered the Port Weller Dry Dock in St.Catharines, ON for replacement of 49 bottom plates and other work to its unloader system. In January 2007 it returned to Halifax Shipyard for additional hull plates on both sides and forward.
In March 2009 the ship laid up in Montreal for the last time.
In its career in the salt business it travelled up and down the Canadian and US east coasts delivering road salt, but also carried other cargoes such as gypsum. It even unloaded bulk salt in Halifax on at least one occasion, using the open space at pier 9D, where the salt was tarped over and used up during the winter. It also delivered a cargo of coal to the same location if I recall aright.
Certainly getting 35 to 40 years out of a ship would be a remarkable achievement in itself, but when it has been trading in the fairly brutal salt business, then this ship's longevity certainly is significant.