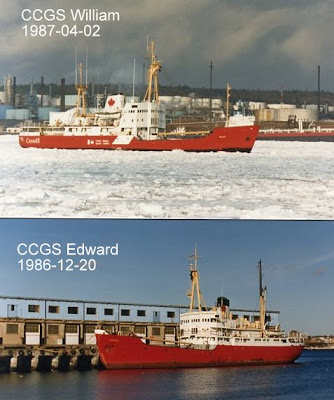 The first CCGS Edward Cornwallis was built by Canadian Vickers Ltd in Montreal in 1949. She was steam powered, by engines built by Canadian Vickers. At the time the CCG did not exist, and she served for the Department of Transport in their black hull/ tan funnel scheme until the CCG was formed. Originally classed as a lighthouse tender, she was a buoy tender and light icebreaker also. In May 1986 she was renamed Edward to free up the name for her replacement. In 1987 she was towed to Coburg, ON by the tug W.N.Twolan to be converted to a hotel, but the scheme did not last and in 1993 she was broken up in Port Maitland, ON.


The first CCGS Sir William Alexander also pre-dated the Canadian Coast Guard, and was launched by Halifax Shipyard December 13, 1958. She was delivered in 1959 and was reputed to be the best ship the Coast Guard had at the time. Power came from four 1333bhp Fairbanks Morse engines (built by Canadian Locomotive Works in Kingston, ON) through two 865kW generators to two 2,125 bhp electric motors. In 1987 the ship was renamed William to free up the name but served concurrently with her replacement until she was decommissioned in July 1989.

In February 1990 she was renamed H22 and put up for sale. She moved around to various berths in Halifax until August 27, 1992 when she moved to Shediac, NB. Then in 1993 she was reported sold to Belize flag interests and renamed Pilar Del Caribe. Lloyd's still lists her under that name, but now with no flag and no owner.

Both of the current ships are on the long list for replacement someday (at 24 and 25 years old they have a few years to reach to the 38 and 30 of their predecessors.) However new ships will likely not repeat the names. Edward Cornwallis, the founder of Halifax, has been discredited for his treatment of indigenous people. Sir William Alexander had the idea of colonizing Nova Scotia , but is now considered to have been merely a well connected speculator.

Update: Thanks to Jason - see comment below, I have been directed to a photo of Pilar Del Carib ex William, wrecked on a beach in Jamaica. http://www.panoramio.com/photo/1575484
It turns out that the ship was operating in Jamaica when cocaine was found on board in 1995. It was seized by the Jamaican government and sold for scrap. However it went ashore and became a favourite for photographers. It has since been broken up in place. The last photos of her in more or less intact condition were taken in 2008.