Encana and SBM gearing up 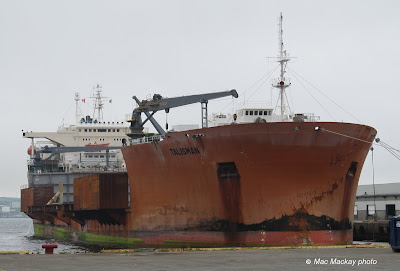 1. Through the fence at pier 31, Talisman has a deck extension and some guards installed on her starboard side to restrain a deck load, which will be floated on.


Encana, operators of the Deep Panuke gas field off Nova Scotia have been very quiet of late, and so have their main contractors SBM (Single Buoy Moorings). However activity is gearing up with a plethorta of vessels arriving in the very short term to install the MODU (Mobile Offshore Production Unit)

Essentially a four legged platform, it will recover gas from up to eight wells, process it and send it ashore via pipeline. It will house workers, and be fitted with cranes and other gear.

Since most of the components for the MODU have been built overseas, they will be arriving on barges and semi-submersible ships and some will likely use the Strait of Canso as their base of operations. Other activities will occur completely at sea, so we may not such much in Halifax.

However today's arrival of the semi-submersible heavy lift ship Talisman is an indication of what may be coming. Built in 1993 as the tanker Comor, renamed in 1999 Front Comor, it was rebuilt in 2008 to its present configuration. (It also looks like it hasn't been painted since then either.) As a semi-submersible ship, it can carry large components, and can submerge (if needed) to float the componentns off and on. It has been especially prepared for this project, and will be off to the Mulgrave area soon.

Among the other equipment scheduled to arrive for the MODU installation is the barge Boabarge 36, which will transport the Field Production Centre (FPC) from Halifax to Deep Panuke. It will be accompanied by four large tugs, Maersk Challenger and Maersk Chignecto, and two yet to be named foreign tugs, which will tow and standby the barge throughout the operation. But that is only one component of the project, and other vessels are expected too.