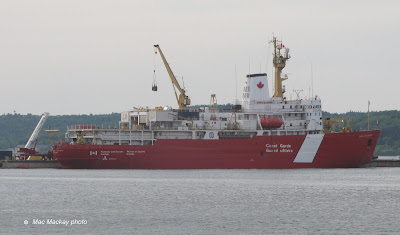 CCGS Louis S St-Laurent came off the drydock on the weekend and moved to the Bedford Institute dock. This is of course the dock which was too small to accommodate the ship. That combined with all the extra steaming time to get to Halifax from the arctic resulted in the transfer to Argentia. I didn't believe it then and I still don't!

Anyway the ship is storing up for its summer in the arctic. Whether it goes to Argentia first (and why would it?) remains to be seen.

Its normal route to the arctic from Halifax is through the Cabot Strait, up the west coast of Newfoundland and through the Strait of Belle Isle. If all the spin about extra steaming time was true then it better not go to Argentia!

The ship looks quite splendid in its fresh paint and is still an impressive sight no matter what the politicians do with it.
We should know in September which shipyard will build its replacement, CCGS John G. Diefenbaker. Must we be reminded of politicians every time it sails by? Surely there is a Canadian without partisan affiliations whose name could be applied to a ship without controversy. CCGS Terry Fox is a brilliant example of a name choice-there must be more.
Did you know there is a Coast Guard vessel naming policy?
See the gory details here:
http://www.ccg-gcc.gc.ca/e0013696