1. Corner Brook arrived in Halifax in tow of Jim Kilabuk after another main engine breakdown, 2003-01-24. The side ports and elevator housings are on this side of the ship. 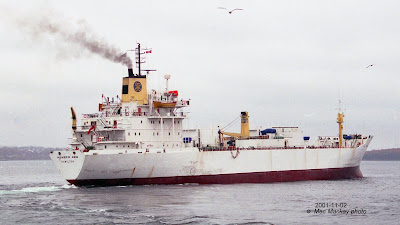 2. Sister Humber Arm sails from Halifax after bunkering on a voyage from Richmond, VA to Corner Brook 2002-11-02. The ship also carried a crane for general cargo and stores.

3. Still in Bowater colours, but with Gorthon funnel mark, Humber Arm arrives in Halifax with rudder damage 1994-02-12. She spent 5 days in drydock for repairs.

One of the major employers on the south shore of Nova Scotia has been the Bowater Mersey Paper Co. Now threatening to close unless it receives concessions from workers (who have narrowly voted to accept a new agreement), the NS Power Corp, the Province of Nova Scotia, the Municipality of Queens County and perhaps others, the mills future is still in doubt.
The original mill was built by the Mersey Paper Co, which was founded by the Nova Scotia entrepreneur Izaak Walton Killam. It is located at Brooklyn, NS, which is on the shores of Liverpool harbour which is fed by the Mersey River.
In 1956 I.W.Killam's estate sold the mill to Bowaters. The company was then renamed Bowaters Mersey Paper Co Ltd in 1959.
In 1930 Mersey Paper founded Mersey Shipping Co Ltd, it was renamed Markland Shipping Co Ltd in 1937 and carried pulp wood and paper products for Mersey Paper and others. In 1959 this line became The Bowater Steamship Co of Canada Ltd. The three remaining Markland ships were transferred to UK registry giving Bowater a fleet of 11 ships, of which four were newsprint carriers.
As the primary supplier to the Washington Post newspaper, a 49% interest in the mill is held by the newspaper, and the mill is run as a joint venture.
When Abitibi bought the Bowater interests and formed AbitibiBowater, and since November 7 when they again changed their name to Resolute Forest Products/ Produits forestiers Résolu, the mill in Liverpool has retained its Bowater Mersey name. It still ships product by sea, but no longer on its own ships.
Markland had a number notable ships, including Vineland and Liverpool Packet (both lost in World War II) Markland, Liverpool Rover, Liverpool Loyalsit a second Liverpool Packet and a second Vineland and Markland.
Bowaters too had a significant fleet, and the last of those has just recently been sent to the scrap yard.
In 1976 Bowater had two ships built in Germany as specialised newsprint carriers. Corner Brook and Humber Arm were built by Schichau-Unterweser in Bremerhaven. Surprisingly they were both lengthened the next year, ending up with a gross tonnage of 7,587 and deadweight of 7,650. Using side doors and elevators, they were able to load paper and pallets using forklifts from dock side. The ships were built primarily to serve Bowaters' Corner Brook mill. A previous Corner Brook and three other Bowater ships from Newfoundland were lost in World War II.
Bowater eventually sold the ships to the old Gorthon Lines and the ships were seen all over eastern Canada as common carriers for any paper producers. They often called in Halifax for bunkers.
Although built to navigate in ice they were very prone to rudder damage, and engine/gearbox problems. Every year one or the other was in trouble and towed into Halifax or another port for repairs.
In 2004 Humber Arm arrived in Setubal, Spain with irreparable crankcase damage and was sold for scrap to Turkey. In deference to its Newfoundland connection it was renamed Umber Arm for delivery to the scrap yard.
Corner Brook had more incidents of damage and fires than Humber Arm, culminating in an engine room fire 700 mi west of the UK, March 23, 2005. The fire was extinguished by CO2, and the was towed to Falmouth by Fairplay XI. Gorthon decided to "divest" the ship and it was sold to Turkish owners and renamed Merve-A. It went through at least one other owner before arriving in Aliaga, Turkey September 5, 2011 for breaking up.
.
Posted by Mac at 10:39 PM