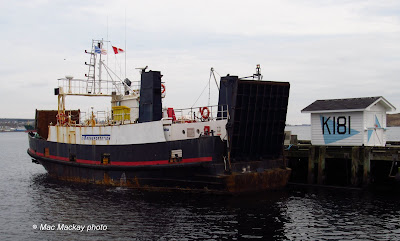 1. Island Joiner tied up at Sackville Landing, shows a significant hull shear when viewed from aft. 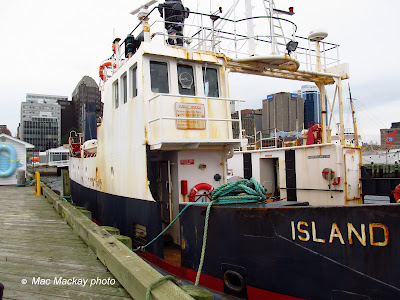 2. The minimal wheelhouse and accommodation block allows for two traffic lanes on deck.

The retired ferry Island Joiner dropped in to Halifax today on its way from Lewisporte, Newfoundland to Florida.
Built in 1973 as Fivia for service in the Faroe Islands, the ship was acquired by the Government of Newfoundland and Labrador in 1983 and operated by the Department of Works, Services and Transportation. It served in Green Bay linking Long Island and Pilley's Island until June of this year when a new ferry was delivered to the area and the services rationalized.
The small ship, measuring only 147 gross tons, has a capacity of 8 cars and 40 passengers (or 93 according to Lloyd's Register.) Plagued by mechanical problems in recent years, it was finally eventually removed from service June 2 and decommissioned at Lewisporte. It was sold for the grand sum of $17,777 plus HST on August 9, to a buyer listed only as a private individual.
The ship is fitted with bow and stern doors and has a narrow house on the starboard side. The one person I spoke to (who had an American accent, and the mandatory Harley Davidson tee shirt) allowed as how the accommodations were "rough".
The entire condition of the boat is rough, and it has a large fuel tank strapped down on deck to supplement the minimal capacity required for it ferry run.
Still flying the Canadian and Newfoundland flags, its registry was nevertheless closed September 21. It has probably been enrolled somewhere as a yacht to avoid too much scrutiny by inspectors.
Once in Florida it will likely be going on to Haiti or some other Caribbean destination where it will soon vanish from sight. That event will be unlikely to sadden too many residents of Pilley Island who have been fed up with the ferry service for years, and would like a $26 mn causeway instead. However they have now been stuck with another venerable ferry Sound of Islay, which will be running to the island unless it is needed elsewhere to cover a breakdown. Then the new ferry Hazel MacIsaac will add the island to its other Green Bay runs.
.
Posted by Mac at 5:58 PM